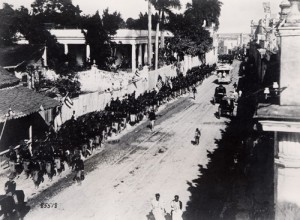 When Spain formally transferred possession of Cuba to the United States on January 1, 1899, yellow fever was among the top concerns of the new occupation government. Historically, foreigners in Cuba succumbed to yellow fever in great numbers, and U.S. officials feared for the health of its 50,000 soldiers stationed on the island. Also, there were fears in the federal government that growing commerce between Cuba and the United States would facilitate the spread of yellow fever to the U.S. South. The occupation was seen by some Americans as an opportunity to prevent yellow fever epidemics in the United States by controlling the disease at its source in Cuba. [1]

Soon after taking control, the occupation government used its powers to implement a massive public health program aimed at the eradication  of yellow fever in Cuba. It passed strict sanitation and quarantine regulations, organized local street-sweeping forces, hired Cuban health inspectors, constructed hospitals, built sanitation systems, published public health reports in newspapers, and stationed non-immune U.S. soldiers in bases outside of the cities. [2] Leading medical authorities in the United States argued that yellow fever was most likely spread through fomites–objects infected by the blood and/or excrement of yellow fever victims. Although this theory had not been scientifically proven, the occupation government believed that through a strict sanitation and inspection system they could prevent the handling of fomites and stop the spread of yellow fever. [3]

Quarantines and Sanitation Do Not Stop Yellow Fever

By the summer of 1900, it was clear that the U.S. sanitation and inspection program had failed to control yellow fever in Cuba. In other ways the program had been a success. It enjoyed the support of much of the Cuban population and facilitated the decline of several other infectious diseases. [4] Initially, there was a significant decline in the yellow fever infection rate, but in 1900 the infection rate climbed again as the United States encouraged thousands of non-immune Spaniards to emigrate to Cuba and help rebuild the island. [5] Frustrated by the occupation government’s inability to control yellow fever, the U.S. Army wanted to gather more data about yellow fever in Cuba and ordered the formation of a new military commission charged with “pursuing scientific investigations with reference to the infectious diseases prevalent on the Island of Cuba.” [6] ”Sources“