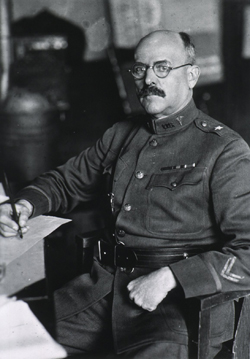 “He possessed one of the keenest, most scholarly minds I’ve ever encountered,” recalled Nobel Prize winner Philip S. Hench of Jefferson Randolph Kean. [1]  Kean and Hench shared an abiding interest in the work of the United States Army Yellow Fever Commission — Kean, as a contemporary and supporter, and Hench, as a scholar and scientist intent on accurate historical documentation.  On the advice of yellow fever experiment volunteer John J. Moran, Hench first wrote Kean in 1939.  From that initial contact developed a close friendship which would last for the remainder of their lives.  Kean entrusted Hench not only with numerous period documents, including original letters, accounts, fever charts, and other items, but also with the freely-given counsel and insight of a trusted friend.

Like Walter Reed and Henry Rose Carter before him, Jefferson Randolph Kean was an alumnus of the University of Virginia, completing the medical program there in 1883.  Kean joined the U.S. Army Medical Corps in 1884, and after forty years in the service, retired with the rank of Colonel.  Congress awarded him a promotion to Brigadier General, retired, in 1930.  The early years of Kean’s career passed in medical postings in the American West, and no doubt offered him experiences similar to those of Walter Reed, whom he met not on the frontier, but in Florida in 1896.  Kean became an expert in tropical diseases and sanitation during his five-year assignment in the Florida tropics, an expertise which served him well over two terms of service later in Cuba.  During the Spanish-American War and subsequent U. S. occupation of Cuba, Kean was Chief Surgeon for the Department of Havana, then Superintendent of the Department of Charities — from 1898 to 1902.  After a four-year interlude as an assistant to the Surgeon General in Washington, D.C., Kean again returned to Cuba as an advisor to the Department of Sanitation from 1906-1909.

Kean himself stated: “Reed and I were good friends before the Yellow Fever Board came to Cuba in June 1900, and [Reed] located himself at Marianao, 8 miles S. W. of Havana,” to be within the medical and administrative jurisdiction overseen by Kean. [2]  The Chief Surgeon did indeed offer significant assistance, and was an early convert to Carlos Finlay’s mosquito theory of transmission, which the Yellow Fever Board’s experiments ultimately proved true in the  late autumn and winter of 1900 and 1901.  As early as October 13, 1900 — after the Board’s preliminary work, but before the final convincing demonstrations — Kean issued “Circular No. 8,” concerning the latest scholarship on the mosquito vector for disease. [3]  The circular contained a set of instructions for the entire command on mosquito eradication.  Kean subsequently served as quartermaster and financial administrator for the famous series of yellow fever experiments at Camp Lazear and, for the rest of his life, Kean remained a strong proponent of the Commission’s conclusions.  He worked tirelessly not only to apply them in the field, but also to accord proper public recognition to the Commission’s work.

In addition to his career as a sanitarian, Kean organized the department of military relief of the American Red Cross, and during World War One served as Chief of the U. S. Ambulance Service with the French Army and Deputy Chief Surgeon of the American forces.  France named him an Officier de la Légion d’Honneur in recognition for these services.  Cuban authorities as well offered Kean recognition with the grand cross of the Order of Merit and he received both a Distinguished Service Medal from the United States government and the Gorgas Medal from the Association of Military Surgeons.  For a decade after his retirement from active duty, Kean edited this last organization’s medical journal, The Military Surgeon, and served on the Surgeon General’s editorial board for the multi-volume history of the medical department in World War One.  A great-grandson of Thomas Jefferson, Kean also took a seat with the government commission established to build the Jefferson Memorial in Washington, D.C.  He held charter membership in the Walter Reed Memorial Association, and remained active in its affairs until his death in 1950.