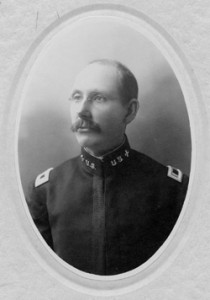 James Carroll was born in Woolrich, England in 1854, the son of Harriett Cheverton and Royal Artillery gunner James Carroll. At the age of 15, the young Carroll abandoned plans to follow his father’s footsteps in the British Army and emigrated to Canada, where he took on odd jobs as a backwoodsman, cordwood chopper, blacksmith, and railroad laborer. In 1874, after 5 years in Canada, James Carroll emigrated to the United States and enlisted in the U.S. Army.

James Carroll would spend the rest of his life in the U.S. Army. At first, he served as an infantryman in the western territories. Later, he was appointed hospital steward, where he excelled and found a new calling in medicine. At the age of 30, Carroll, began taking courses at the Medical College of St. Paul, Minnesota and two years later, while still serving as an army hospital steward, he informally continued his education at the University of New York and Bellevue Hospital. After 15 years of military service in the West, Carroll was transferred to Maryland where he matriculated to the University of Maryland to earn a degree in medicine.

While stationed in Baltimore, James Carroll took advantage of post-graduate programs at the nearby Johns Hopkins University to learn more about the emerging field of bacteriology. There, Carroll excelled in the study of bacteriology under the pioneering professor William Welch. In 1895, the army recognized this work and transferred him to Washington, D.C. to assist Walter Reed in the instruction of Clinical and Military Microscopy at the recently-formed U.S. Army Medical School.

In the years following his work with the U.S. Army Yellow Fever Commission, Carroll was appointed a professor of bacteriology at George Washington University and was made the curator of the Army Medical Museum. Carroll died in 1907 of complications from the bout of yellow fever he suffered in Cuba while working for the Commission. Carroll was survived by his wife Janetta (Jennie) George Carroll and their seven children: James, David, George, Mabel, Carolyn, Ruth, and Ethel.