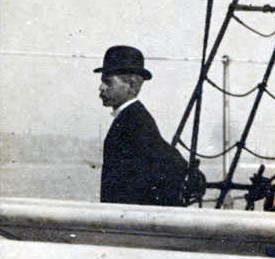 Here I have been sitting reading that most wonderful book — La Roche on Yellow Fever — written in 1853. Forty-seven years later it has been permitted to me & my assistants to lift the impenetrable veil that has surrounded the causation of this most dreadful pest of humanity and to put it on a rational & scientific basis.” — Walter Reed in a letter he wrote to his wife at midnight, December 31, 1900 [1]

In Cuba, at the dawn of the 20th century, the Yellow Fever Commission established by the U.S. Army had demonstrated irrefutably that the mosquito was the vector of transmission for yellow fever. Cuban scientist Carlos J. Finlay had first proposed such a connection in 1881, but had not been able to prove his theory conclusively to the world scientific community.

The members of the Commission, Walter Reed, James Carroll, Aristides Agramonte, and particularly Johns Hopkins scientist Jesse Lazear, had sought Finlay’s assistance to clarify and ultimately test the mosquito theory. Indeed in the very early stages of the investigation, Lazear lost his life to a case of yellow fever, very likely experimental in origin.

Deeply dismayed at the loss of their friend and colleague, but intrigued by the very real possibility of a solution within reach, the Commission designed an experimental protocol which would withstand strict scientific scrutiny. They obtained permission from the military leadership to establish an experimental facility — which they named Camp Lazear — on the outskirts of Havana and implemented a bold study using human subjects. The decision to use human subjects was necessary because at the time yellow fever was not known to affect any other species.  In 1900, human experimentation was not a new idea, but unlike most other studies of that period, the subjects at Camp Lazear would be volunteers. They would have full knowledge of the experiment and, in what may be the first such case in history, signed informed consent agreements.

As Walter Reed wrote to his wife, the experiments proved dramatically successful. Public health officials implemented mosquito eradication campaigns throughout the Americas and yellow fever was largely conquered in the Western Hemisphere.