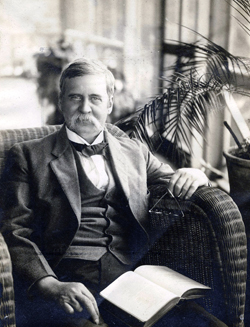 Like Walter Reed and Jefferson Randolph Kean, Henry Rose Carter was a native Virginian and a graduate of the University of Virginia. Carter obtained a civil engineering degree from Virginia in 1873 and also undertook post-graduate work in mathematics and applied chemistry the next year. Subsequently, however, Carter’s interests turned towards medicine, and he completed a medical degree at the University of Maryland in 1879. The same year Assistant Surgeon Carter joined the Marine Hospital Service — later the United States Public Health Service — and the young surgeon rose steadily through the ranks, ultimately attaining the position of Assistant Surgeon General in 1915.

Carter’s initial assignments with the Hospital Service placed him at the center of the yellow fever maelstrom. In 1879 he was detailed to Memphis and other Southern cities, then in the throes of a second year of devastating epidemics. Here began, as his colleague T. H. D. Griffitts observed, Carter’s “lifelong interest in the epidemiology and control of yellow fever.” [1] After several years of clinical practice in various Marine hospitals, Carter resumed a direct confrontation with yellow fever when his orders for duty with the Gulf Coast Maritime Quarantine assigned him to Ship Island, Mississippi, in 1888. Here and at subsequent quarantine station postings around the Gulf, he quietly championed a thorough review and rationalization of quarantine policies, with a view toward establishing uniform regulation, more thorough disinfection of vessels, and minimized interference with naval commerce. Crucial to the success of these activities was Carter’s attention to the incubation period of yellow fever, which his on-site observations indicated to vary between 5 and 7 days. At the time the official literature stated with far less precision a variance of between 1 and 14 days; Carter’s work consequently greatly increased the efficiency and effectiveness of quarantine operations.

Nevertheless, yellow fever continued to menace the temperate coastline of the United States, and Carter ably directed the Health Service’s epidemiological control efforts in numerous threatened regions. In conjunction with this sanitary work for the 1898 season, Carter made detailed notes on the development of yellow fever at Orwood and Taylor, Mississippi. The isolation of these communities enabled him to identify more reliably the phenomenon of a delay between the initial cases of yellow fever in a locality and the subsequent appearance of secondary infection — a delay two to four times longer than the incubation period of the disease in an infected person. Carter called this interval between the primary and secondary cases “the period of extrinsic incubation,” and he defined its “usual limits . . . [as ranging] from ten to seventeen days.” [2]

Before he was able to publish his conclusions, Carter took the helm of the quarantine service in war-time Cuba. There, in 1900, he met U. S. Army Yellow Fever Commission member Jesse Lazear. Carter had finally arranged for his paper’s publication that year in the New Orleans Medical and Surgical Journal, and gave a draft to Lazear. “If these dates are correct,” Carter later recalled Lazear saying, “it spells a living host.” [3] The theory of mosquito transmission long advanced by Cuban scientist Carlos J. Finlay began to seem more likely. And indeed it was. The Commission’s experiments in 1900-1901 irrefutably proved the mosquito vector and established the extrinsic incubation period at twelve days. Shortly after these successes Reed saluted Carter, “I know of no one more competent to pass judgment on all that pertains to the subject of yellow fever. You must not forget that your own work in Mississippi did more to impress me with the importance of an intermediate host than everything else put to-gether.” [4]

Carter’s long and distinguished sanitary career took him to the Panama Canal Zone in 1904, where he served as Chief Quarantine Officer and Chief of Hospitals for five years. He undertook detailed investigations and control measures of malaria in North Carolina and elsewhere in the South, and became a founder of the National Malaria Committee. With the support of the Rockefeller Foundation International Health Board, he undertook additional investigation and control measures for yellow fever in Central and South America. His expertise recommended him to the Peruvian government, which named Carter Sanitary Advisor in 1920-1921. Health problems at the end of his life compelled Carter to withdraw from active fieldwork, though he remained a highly valued consultant to the Health Board and a much-beloved and respected teacher for a new generation of sanitarians. Carter closed his career researching and writing the manuscript that his daughter Laura Armistead Carter edited and published posthumously in 1931: Yellow Fever: An Epidemiological and Historical Study of its Place of Origin. [5] Sources