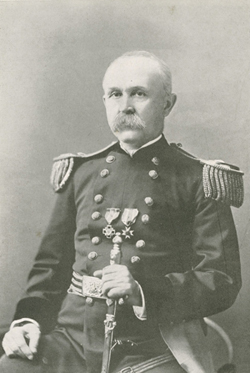 George Miller Sternberg, a former Surgeon-General of the United States Army, was a pioneer in bacteriology and a central figure in U.S. medicine at the end of the 19th century. Born in 1838 at Hartwick Seminary, New York, Sternberg was the son Margaret Miller Sternberg and Levi Sternberg. At the age of 12, young George left home to assume his first job in a bookstore. Four years later he returned home to work as a schoolteacher and an instructor at Hartwick Seminary. Sternberg embarked on a career in Medicine in 1857 by assuming an apprenticeship with a country doctor and later enrolled in the Western College School of Medicine of Buffalo, NewYork. In 1859 he transferred to Columbia University’s College of Physicians and Surgeons where he graduated with a M.D. in 1860. At the outbreak of the Civil War, Sternberg was appointed an Assistant Surgeon in the United States army. He thrived in the military and rapidly rose through the ranks. From 1861 to 1862, Sternberg served with distinction in Virginia and participated in several major battles. During the next two years of the conflict, he served in New Orleans as assistant medical director of the U.S. Department of the Gulf. In his final assignment of the war, Sternberg was placed in charge of a large hospital in Cleveland, Ohio. In 1865, Sternberg decided to remain in the army, and like Walter Reed, served for several years as a surgeon in various western outposts. After the war, Sternberg also married Maria Louisa Russell, but the marriage did not last long. Russell died a short two years after the wedding. With the death of his wife, Sternberg threw himself into his work. As a frontier surgeon he had a wide range of responsibilities that included camp sanitation, emergency surgeries, and clinical services for soldiers and civilians. In his limited free time, George Miller Sternberg continued to work, pursuing interests in new scientific and medical approaches. He invented scientific instruments, observed microscopic organisms, and became a pioneer in the use of photography to record microscope observations. In 1869, Sternberg married Martha L. Pattison of Indianapolis, Indiana. Shortly after their marriage, Sternberg was transferred east to the military installation at Governor’s Island in New York City. At Governor’s Island, and later at Fort Barracas, Florida, he treated a number of yellow fever patients and contracted the disease himself. These experiences led to the publication of two articles that made Sternberg a well-known medical researcher and yellow fever expert. Despite his growing stature as a medical researcher, Sternberg was first and foremost a U.S. Army surgeon and he was still expected to fulfill the duties of a typical person in that position. In 1877, he was ordered to serve once again in the West at Fort Walla Walla and participated in the U.S. Army’s pursuit of the Nez Perce. In his free time, he continued his research.

In 1879, the U.S. Army, which recognized Sternberg as one of the country’s foremost authorities on yellow fever, ordered him to serve on the 1880 Havana Yellow Fever Commission with Drs. Stanfard Chaille and Juan Guiteras. Sternberg’s role on the commission was to conduct examinations of the blood and tissues of yellow fever victims to determine if a microorganism was the cause of the disease. Using microscopic photography, Sternberg was able to show that a number of organisms did not cause yellow fever, but he could not find the culprit. From 1880 to 1893, Sternberg continued to serve in the army and conduct groundbreaking work in the emerging field of bacteriology. He published articles on the cause of Malaria, co-discovered the cause of lobar pneumonia, and became a U.S. pioneer in the study of disinfection. In 1893, President Grover Cleveland appointed George Miller Sternberg the Surgeon General of the U.S. Army. In that role, Sternberg transformed military medicine in the United States. During his tenure, the federal government established the Army Medical School, organized the army nurse corps, and expanded laboratories in army hospitals. In 1900, Sternberg organized a new Yellow Fever Commission, led by Walter Reed, which irrefutably proved Carlos J. Finlay’s theory that yellow fever was transmitted by the Aedes Aegypti mosquito. Two years after organizing the U.S. Army Yellow Fever Commission, Sternberg retired from the U.S. Army. He spent the remainder of his working for improved sanitation and on behalf of tuberculosis patients near his residence in Washington, D.C. George Miller Sternberg died in Washington, D.C. on November 3, 1915.