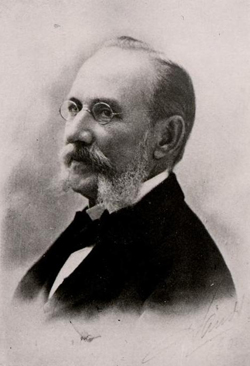 For twenty years of his professional life, renowned Cuban physician and scientist Carlos J. Finlay stood at the center of a vigorously debated medical controversy. The etiology of yellow fever — its causes and origins — had puzzled medical practitioners since the earliest recorded cases of the disease in the fifteenth and sixteenth centuries. Periodic epidemics of yellow fever ravaged the population of Finlay’s native Cuba, particularly affecting the citizens of Havana, where he set up a medical practice in 1864. Finlay was intensely interested in epidemiology and public health, and his initial work on cholera — the result of a severe outbreak of the disease in Havana in 1867 — challenged the received wisdom of medical authorities.

His conclusion that the disease was waterborne, though later verified, was rejected by publishers at the time. Finlay soon afterwards began research on yellow fever, publishing his first paper on it in 1872. Here the same keen observations and logical deductions which informed his analysis of cholera lead him to propose in 1881 that the Culex mosquito be “hypothetically considered as the agent of transmission of yellow fever.” [1] This time the paper was published, but the wide professional circulation of The Annals of the Academy of Medical, Physical, and Natural Sciences of Havana did not assure Finlay of widespread support. Indeed, only one other Cuban physician, Claudio Delgado, rallied to Finlay’s side in those early years.

Finlay himself recognized the difficulties inherent in his revolutionary proposal: “I understand but too well,” he concluded in the now famous 1881 paper, “that nothing less than an absolutely incontrovertible demonstration will be required before the generality of my colleagues accept a theory so entirely at variance with the ideas which have until now prevailed about yellow-fever.” [2] From 1881 to 1900, Finlay pursued a campaign of 102 experimental inoculations on human volunteers, with the aim of demonstrating both the truth of his hypothesis and the possibility of inducing immunity to the disease. Finlay did believe that he had produced cases of yellow fever by mosquito inoculation, although the larger public health community remained skeptical. George Miller Sternberg, later to become Surgeon General of the United States Army, offered an essential critique of Finlay’s experiments:  that the participants were never sufficiently isolated from the general population eliminate the possibility of contracting fevers from sources other than Finlay’s mosquitoes. [3] This and the inconsistency with which fevers developed in the experimental participants kept the mosquito theory on the margins. Nevertheless, Finlay’s expertise gained a place for him among the leading public health practitioners in Havana, and his advice and experiences proved invaluable to the U.S. Army Yellow Fever Commission.

When the Commission decided to test the mosquito theory, Finlay provided the mosquitoes, and with the Commission’s first scientifically valid success, Walter Reed wrote triumphantly, “The case is a beautiful one, and will be seen by the Board of Havana Experts, to-day, all of whom, except Finlay, consider the theory a wild one!”[4] The full run of experiments at Camp Lazear vindicated Finlay’s two-decade-long struggle. In the glow of that early success, Reed acknowledged that “it was Finlay’s theory, & he deserves much for having suggested it.” [5] William Crawford Gorgas, who later applied the results of the experiments to a public health campaign which made possible the construction of the Panama Canal, characterized Finlay’s contribution in this way:  “His reasoning for selecting the Stegomyia as the bearer of yellow fever is the best piece of logical reasoning that can be found in medicine anywhere.” [6] Finlay concluded his career as the Chief Sanitary Officer of Cuba, a position he held for eight years before retiring in 1909.