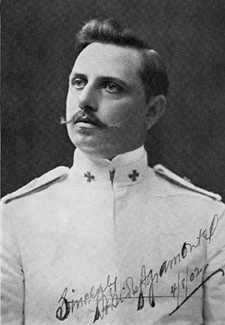 Aristides Agramonte Simoni, better known in the United States as Aristides Agramonte, was born in Puerto Principe, Cuba at the beginning of the First Cuban War of Independence (1868-1878). His father, Eduardo Agramonte Piña, was a doctor who served as a Brigadier General in Cuba’s Army of Liberation. When Eduardo was killed by Spanish troops during a military campaign in 1872, 3-year old Aristides and his family emigrated to the United States.

Agramonte earned his medical degree in 1892 from the College of Physicians and Surgeons in New York and was subsequently appointed assistant bacteriologist with the New York Health Department. He continued in this office until May of 1898, when Surgeon General George Miller Sternberg appointed him Acting Assistant Surgeon in the U.S. Army.

In July of 1898, Sternberg sent Agramonte Simoni to Cuba to study a major outbreak of yellow fever among U.S. military forces stationed in and around Santiago. There, Agramonte Simoni performed autopsies in order to determine if bacillus icteroides, as had been claimed by the eminent scientist Giuseppe Sanarelli, was the causative agent of the disease. He found Sanarelli’s agent in only three of ten victims. His work, in conjunction with Reed and Carroll’s similar research in Washington, discredited Sanarelli’s thesis. In December of 1898, Sternberg sent Aristides back to Cuba after two bacteriologists from the U.S. Marine Hospital Service (later the U.S. Public Health Service) claimed to have confirmed Sanarelli’s thesis. The yellow fever outbreak in Santiago in the summer of 1899 provided him with an abundance of research material. Working side by side with the USMHS bacteriologists, he verified his previous findings: bacillus icteroides was not present in all yellow fever victims. In May of 1900, still in Havana as laboratory director of the military hospital, Agramonte Simoni received from Sternberg a letter of appointment to the U.S. Army Yellow Fever Commission.

After the commission disbanded, Agramonte Simoni stayed in Cuba and became an influential member of the nation’s medical community. In 1900, he was appointed to a professorship at the University of Havana and in later years served the Cuban government in various public health offices. In 1931, he died in New Orleans while preparing for a new appointment as the head of the Tropical Medicine Department at Louisiana State University. Aristides was survived by his wife, Frances F. Agramonte, and his daughter, Estela Agramonte Rodriguez Leon.