A Sett of Anatomical Tables, with Explanations, and an Abridgement, of the Practice of Midwifery. London printed: [s.n.], 1754. Fulltext online 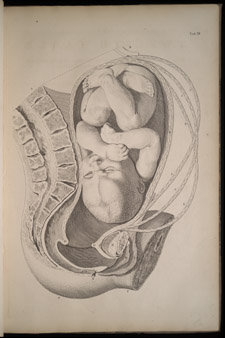 William Smellie, A Sett of Anatomical Tables…. This engraving shows the gravid uterus when labor is somewhat advanced. 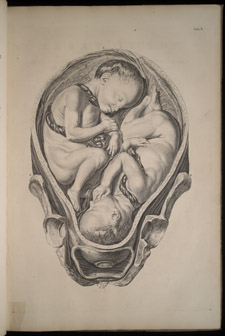 William Smellie, A Sett of Anatomical Tables…. This is Smellie’s engraving of twins in utero.

William Smellie, A Sett of Anatomical Tables…. For this labor complication Smellie explains various manipulations to change the position of the fetus by the practitioner’s hand, and that failing, suggests tying a noose around the ankles. 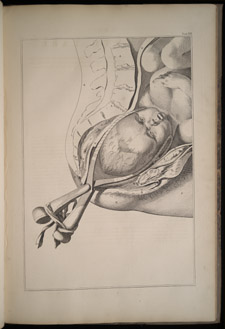 William Smellie, A Sett of Anatomical Tables…. This image shows the head of the fetus “helped along with the Forceps as artificial Hands.”

In a world where midwifery was dominated by women, William Smellie was one of the first notable man-midwives in Great Britain. He eventually became one of the greatest figures in obstetrical history. He based his teaching of obstetrics and midwifery on scientific principles, developed and refined obstetrical tools, was the first to outline safe rules for the use of forceps, and separated surgery from obstetrical practice. Through years of experience and scientific observation, Smellie accurately described the birth process in his book, A Treatise on the Theory and Practice of Midwifery. Based on 1,150 deliveries, the book covers normal obstetrics as well as complications. The first French edition, Traité de la theorie et pratique des accouchemens, was published in 1754, two years after the first English edition.

Also in 1754, Smellie published A Sett of Anatomical Tables, with Explanations, and an Abridgement, of the Practice of Midwifery. Thought to be issued in only 100 copies, this set of plates is extremely rare. It provided the most detailed and accurate depictions of childbirth at the time of its publication. In his preface Smellie states, “…the greatest part of the figures were taken from Subjects prepared on purpose, to shew eyery thing that might conduce to the improvement of the young Practitioner, avoiding however the extreme Minutiæ.”

According to One Hundred Books Famous in Medicine,

The plates in this classic of obstetrical illustration are far superior to any that had appeared before. They give everywhere a masterly representation, true to nature, of the relations of the parts of mother and child, and have perhaps contributed more to spreading correct ideas of labor than all the books that have ever been written on the subject. (One Hundred Books 162)

Smellie illustrates a number of complications possible in childbirth and gives detailed directions for delivery. He was the first to use forceps to rotate the fetal head and the first to use them on the head in a breech delivery. He made important modifications to the “Chamberlen” forceps, included shortening and curving the blades and perfecting a locking mechanism.