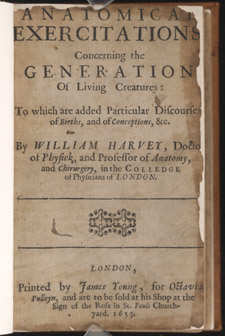 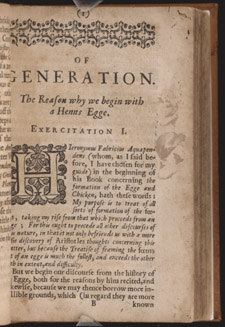 William Harvey, Anatomical Exercitations…. In the chapter entitled “The Reason why we begin with a Henns Egge” Harvey explains he will use his teacher Fabricius as guide. 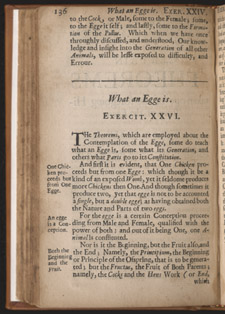 William Harvey, Anatomical Exercitations…. From the chapter “What an egge is.” 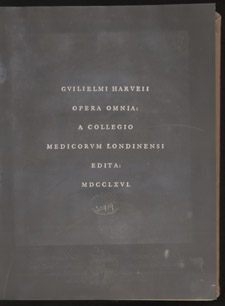 William Harvey, Opera omnia…. This title page and several leaves at the beginning of the book were copied and added before a modern binding was attached. 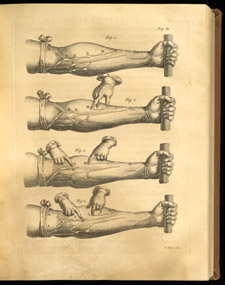 An Englishman trained at Cambridge University before he studied at the University of Padua under Fabricius, William Harvey set up a London practice and became a professor of anatomy at the College of Physicians. Some consider his treatise on the circulation of the blood the most significant finding in the history of medicine. In addition to this remarkable discovery, Harvey’s work also made a huge contribution to the scientific method. Historian H. P. Bayon called it “the first record of a complete scientific investigation,” in which a problem was defined, methods of solving the problem were explained, and the results were reported. Because Harvey refuted Galen’s theories of blood movement, his work took time to be accepted and for several decades was considered controversial.

Harvey’s treatise on embryology, Anatomical Excertations, Concerning the Generation of Living Creatures, would have secured his place among the great medical thinkers on its own. Here, expounding on Professor Fabricius’s work, Harvey disavowed the accepted doctrine of a pre-formed fetus, maintaining instead that the fetus proceeded from the ovum and then slowly grew and developed.