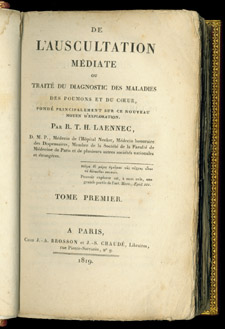 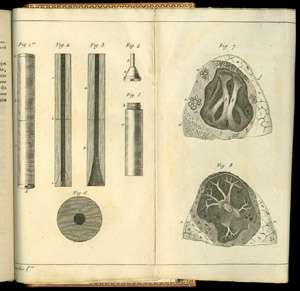 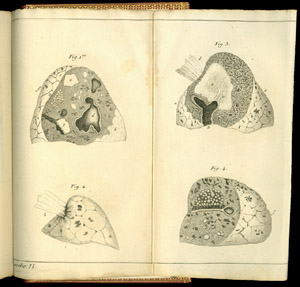 René Théophile Hyacinthe Laennec, De l’auscultation médiate…. Most of the plates in his book illustrate the diseased lung as do these four images that are consistent with lungs affected by tuberculosis.

René Laennec was the leading French internist of his time. For millennia practitioners had tried to figure out what was going on inside the human body by placing an ear directly on a patient’s chest, in other words, by direct auscultation. Laennec was the first to use medial or indirect auscultation when he, “…rolled a quire of paper into a sort of cylinder and applied one end of it to the region of the heart and the other to my ear.” He was surprised and pleased, “…to find that I could thereby perceive the action of the heart in a manner much more clear and distinct than I had ever been able to do by the immediate application of the ear.” [Laennec 211]

De l’auscultation médiate was initially published in 1819, three years after Laennec first used his roll of paper. The book introduces the stethoscope and describes as never before the audible sounds of thoracic diseases. It is also the result of 18 years of study by Laennec on the clinical aspects and pathological anatomy of diseases of the heart and lungs. Because Laennec heard sounds no one else ever had, he established words such as râles, bronchial breathing, bubbling, metallic tinkle, and egophone. Ironically, one of his best known word creations is cirrhosis and has nothing to do with respiratory diseases.

Laennec experimented with his stethoscope design and fashioned a hollow cylinder of wood about 12 inches long that was divided in the middle so that it could be taken apart and easily conveyed. “This instrument I commonly designate simply the Cylinder, sometimes the Stethoscope.” [Laennec 212] His invention was the most significant advance in physical diagnosis between the introduction of thoracic percussion (tapping a patient’s chest and determining from the resultant sound whether it was healthy or diseased) in 1761 and the discovery of X-rays in 1895.