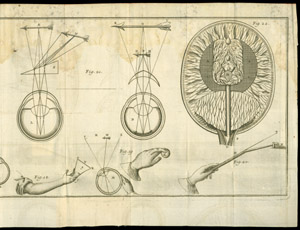 René Descartes, L’homme…. These drawings show the influence of Descartes’ knowledge of mathematics and geometry on his perception of how the body works. 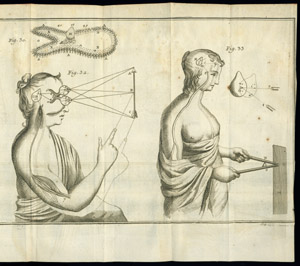 René Descartes, L’homme…. “…I desire you to consider, I say, that these functions imitate those of a real man as perfectly as possible and that they follow naturally in this machine entirely from the disposition of the organs-no more nor less than do the movements of a clock or other automaton, from the arrangement of its counterweights and wheels.” [Descartes 113]

The French mathematician and philosopher, René Descartes, developed a system of dualism which distinguishes between the “mind,” whose essence is thinking, and “matter,” whose essence is extension into space. This dualism influenced his mechanical interpretation of nature and therefore of the human body. He believed that the laws of physics and mathematics explain human physiology. According to One Hundred Books Famous in Medicine, De homine, “is the first work in the history of science and medicine to construct a unified system of human physiology that presents man as a purely material and mechanical being: man as machine de terre.” [One Hundred Books 117] This concept helped free the study of physiology from the constraints of religion and culture. De homine is an important early textbook of physiology, but empirically flawed because Descartes’ practical knowledge of his subject was inadequate.

Descartes originally planned to publish De homine in 1633, but hearing of Galileo’s condemnation by the Church, he became concerned for his own safety and refused to have it printed. Consequently, the first edition of this work appeared 12 years after Descartes’ death. Our French edition, L’homme, also includes la formation du foetus which explains reproductive generation in physiological terms.