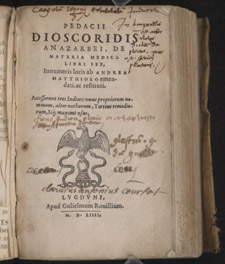 Pedanius Dioscorides, De materia medica libri sex. A printer’s ornament is the same as found in the Galen Aphorisms printed the same year. 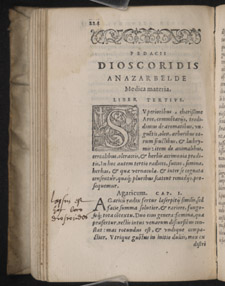 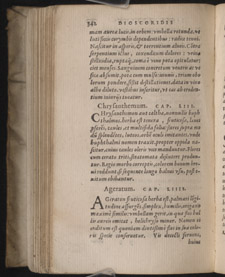 Pedanius Dioscorides. De materia medica libri sex. Shown are the names of plants familiar to us today, Chrysanthemum and Ageratum.

A Greek surgeon who served in Nero’s army in the first century, Pedanius Dioscorides wrote an extensive guide to pharmacy and medical botany. Considered the classic text for 1500 years, it describes more than 600 plants and plant ingredients. Dioscorides included details of plant habitat and methods of growing and harvesting plants, as well as their medical usage and dosage. Even though opium had been used for centuries, Dioscorides was the first to describe its benefits and dangers. He also discussed mineral and animal products that were of medicinal value. His work identified plant families long before Linneaus’s classification system in the eighteenth century.

Our copy was translated by Pietro Mattioli of Siena, who studied medicine at the University of Padua and was physician to Holy Roman Emperors Ferdinand I and then Maximilian II. Mattioli wrote books on the practice of medicine, therapeutics, and syphilis, but this was his most popular work. Mattioli translated De materia into Italian in 1544 and provided the best botanical illustrations known at that time. Ours is a later, pocket-sized edition of the same text, but it does not have the fine illustrations of earlier editions.