The English Physician: Or, An Astrologo-physical Discourse of the Vulgar Herbs of This Nation. London: Printed for the benefit of the Commonwealth of England, 1652. Fulltext available through Early English Books Online (UVa access only)

Culpeper’s English Physician and Complete Herbal…. London: Printed for J. Adlard…for the proprietor and sold at the Encyclopedia Office…and by Champante and Whitrow, 1807-1810. Fulltext online 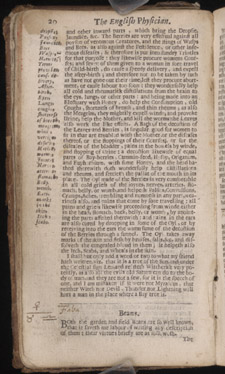 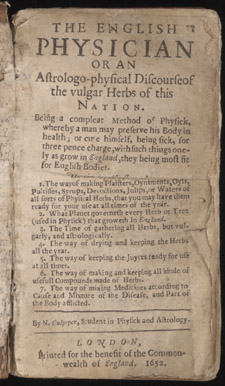 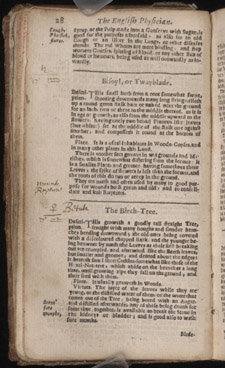 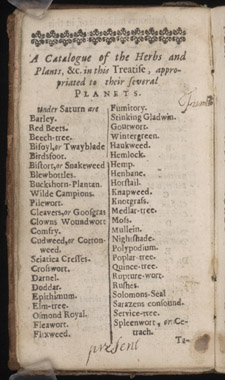 Nicholas Culpeper, The English Physician…. A Catalogue of the Herbs and Plants. 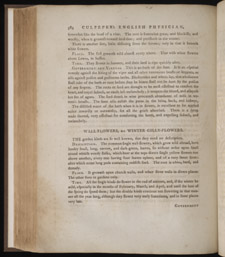 One of the most influential herbalist writers, Nicholas Culpeper wrote extensively on diseases and how to cure them with simple herbs. His work included the first book on midwifery known to be written in English. Most importantly Culpeper advocated a theory of astrological herbalism, popular in mid-seventeenth century England, which tried to show the relationship between plants and the planets. Culpeper’s The English Physician, his most important work, appeared in 1652: later editions were numerous. In the preface Culpeper claimed that his book was superior to Gerard’s (and Johnson’s edited version of Gerard) because it dealt with herbs easily found and grown in England, whereas, he said, Gerard’s included many plants impossible to find in the country. The 1807-1810 edition of The English Physician has careful and plentiful illustrations by E. Sibly.

The title page of The English Physician explains its purpose:

Being a compleat Method of Physick, whereby a man may preserve his Body in health; or cure himself, being sick, for three pence charge, with such things onely as grow in England, they being most fit for English Bodies.
Here in also shewed,
1. The way of making Plaisters, Oyntments, Oyls, Pultisses, Syrups, Decoctions, Julips, or Waters, of all sorts of Physical Herbs, that you may have them ready for your use at all times of the year.
2. What Planet governeth every Herb or Tree (used in Physick) that groweth in England.
3. The Time of gathering all Herbs, but vulgarly, and astrologically.
4. The way of drying and keeping the Herbs all the yeer.
5. The way of keeping the Juyces ready for use at all times.
6. The way of making and keeping all kinde of usefull Compounds made of Herbs.
7. The way of mixing Medicines according to Cause and Mixture of the Disease, and Part of the Body afflicted.