A Treatise on the Diseases of Children, with General Directions for the Management of Infants from Birth …. London: Printed for J. Mathews, 1789. Fulltext available through Eighteenth Century Collections Online (UVa access only) 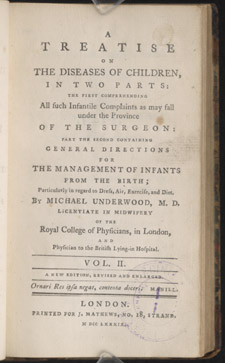 Michael Underwood, A Treatise on the Diseases of Children…. 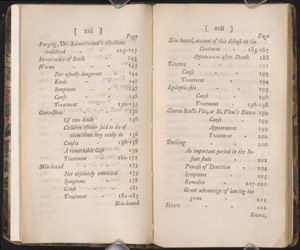 Michael Underwood, A Treatise on the Diseases of Children…. This section of the index includes the skin-bound entries for pages 173-191. 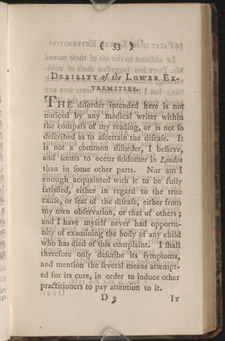 Michael Underwood, A Treatise on the Diseases of Children…. Here begins the first account of polio in the section entitled, “Debility of the Lower Extremities.”

Underwood was born in Surrey, England. He studied surgery and midwifery, a discipline that included pediatrics as well as obstetrics, in London and Paris. He was highly regarded as a “man-midwife” and attended prominent women of the day, including the daughter-in-law of King George III. Underwood oversaw a total of seven editions of his Treatise in his long lifetime, with each successive version written more for the medical profession than for the lay person. One of the best eighteenth-century English works on pediatrics, it remained a standard text for over 60 years.

In addition to a discussion of various diseases, Underwood includes an extensive section on the general care of infants. His baby formula, consisting of boiled cow’s milk and barley water, is the era’s closest imitation of mother’s milk. Underwood makes clear his preference for mother’s milk,

It would be unpardonable, however, in a work of this sort, not to insist how inadequate every substitute for the breast has been universally found; and therefore how proper it is, that every child should have it, and even be suckled by its own mother, where her health can safely admit of it.

Underwood gives a superior discussion of thrush and rickets, and in the 1799 edition, he is the first to describe congenital heart disease. The Treatise also gives the first detailed description of sclerema neonatorum, a disorder of the adipose tissue generally occurring in infants suffering from a serious underlying illness. Called skin-bound in the Treatise, it is also now known as “Underwood’s disease.”

The second edition is notable for including the first account of polio in a section entitled, “Debility of the Lower Extremities.” Underwood writes,

The disorder intended here is not noticed by any medical writer within the compass of my reading, or is not so described as to ascertain the disease. It is not a common disorder, I believe, and seems to occur seldomer in London than in some other parts. Nor am I enough acquainted with it to be fully satisfied, either in regard to the true cause, or seat of the disease, either from my own observation, or that of others; and I have myself never had opportunity of examining the body of any child who has died of this complaint. I shall therefore only describe its symptoms, and mention the several means attempted for its cure, in order to induce other practitioners to pay attention to it.

Underwood then describes “…the debility of the lower extremities which gradually become more infirm, and after a few weeks are unable to support the body.”