The Morbid Anatomy of Some of the Most Important Parts of the Human Body…. Albany: Printed by Barber & Southwick, for Thomas Spencer, bookseller, 1795. Fulltext available through America’s Historical Imprints (UVa access only) 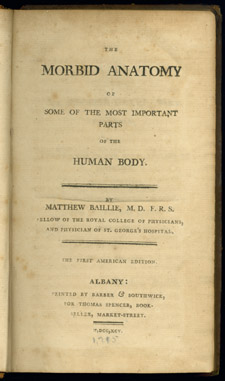 Matthew Baillie, The Morbid Anatomy of Some of the Most Important Parts of the Human Body…. 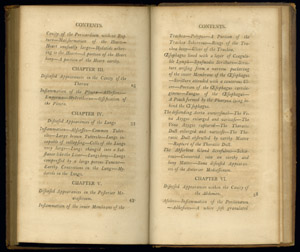 Matthew Baillie, The Morbid Anatomy of Some of the Most Important Parts of the Human Body…. The Contents section in this first American edition reveals Baillie’s systematic arrangement. 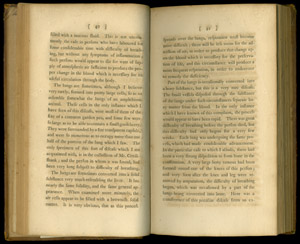 Matthew Baillie, The Morbid Anatomy of Some of the Most Important Parts of the Human Body…. Here is the description of the lung that Baillie saw in the collection of Mr. Cruikshank. It has been proposed that it was Dr. Samuel Johnson’s lung.

Matthew Baillie was the Scottish nephew of William and John Hunter. Upon the death of William in 1783, Baillie, only in his early twenties, inherited his uncle’s anatomy school. He also eventually had one of the most lucrative medical practices in London and, by 1799, was physician to King George III. Baillie’s book, The Morbid Anatomy, is based on his observations of “preparations of morbid appearances” collected by others as well as his exposure to dead bodies from teaching anatomy and by working at the large St. George’s Hospital.

Baillie’s book, originally published in 1793, is the first to introduce pathology as an independent science and the first to discuss organ systems methodically. In his preface Baillie recognizes that,

The natural structure of the different parts of the human body has been very minutely examined, so that anatomy may be said to have arrived at a high pitch of perfection; but our knowledge of the changes of structure produced by disease, which may be called the Morbid Anatomy, is still very imperfect.

Baillie then states that he will give a logically arranged account of the morbid structural changes that can occur in the thoracic and abdominal organs, the urogenital system, and the brain.

The Morbid Anatomy has landmark accounts of gastric ulcers; pulmonary lesions of tuberculosis; ovarian cysts; and pulmonary emphysema, including a description of a lung that was probably from the body of the English author Dr. Samuel Johnson. (One Hundred Books 189)

Baillie also discusses cirrhosis of the liver. He writes,

One of the most common diseases in the liver (and perhaps the most common, except the adhesions which we have lately described) is the formation of tubercles in its substance. This disease is hardly ever met with in a very young person, but frequently takes place in persons of middle or advanced age: it is likewise more common in men than women. This would seem to depend upon the habit of drinking being more common in the one sex than in the other; for this disease is most frequently found in hard drinkers; although we cannot see any necessary connection between that mode of life and this particular disease in the liver.