A Treatise on the Venereal Disease. London: Printed by W. Bulmer for G. and W. Nicol, 1810. 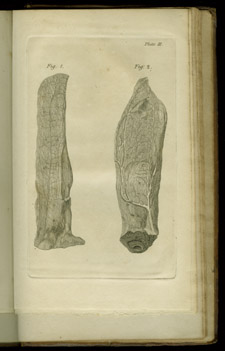 John Hunter, A Treatise on the Blood, Inflammation, and Gun-shot Wounds…. This plate “represents two rabbits’ ears, one in the natural state, the other in an inflamed state, in consequence of having been frozen and thawed.” 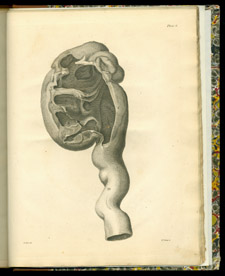 John Hunter, A Treatise on the Venereal Disease. Our third edition has seven plates including this one with the explanation, “A kidney whose ureter, pelvis, and infundibula, are very considerably enlarged in consequence of a stricture in the urethra.”

At the age of 20 John Hunter left Scotland for London to study at the anatomy school run by his older brother William. Within a year John was demonstrating dissections himself. Later, he served as a surgeon with the British army during part of the Seven Years’ War. It was then that he observed many gunshot wounds and began to collect material for A Treatise on the Blood, Inflammation, and Gun-shot Wounds. After two years of army service Hunter returned to London and taught, wrote, did research, and ran a private practice.

Hunter’s contributions to medicine are numerous. He helped transform surgery from a manual craft to an experimental science, and his studies on inflammation were revolutionary and extensive. He wrote important works on teeth and began scientific dentistry in Great Britain, founded the Hunterian Museum with more than 13,000 specimens, was a major contributor to both comparative anatomy and pathological anatomy, performed innovative techniques for treating aneurysms, and was an outstanding orthopedic surgeon.

A Treatise on the Blood, Inflammation, and Gun-shot Wounds was first published posthumously in 1794 by Hunter’s nephew, Matthew Baillie, and includes a biography of Hunter written by his brother-in-law, Everard Home. Home describes how Hunter suffered episodes of attacks or spasms in the last few years of life, and that while “…bodily exercise, or distention of the stomach, brought on slighter affections, it still required the mind to be affected to render them severe.” Home includes the results of an autopsy following Hunter’s sudden death and observes,

The stoppage of the pulse arose from a spasm upon the heart, and in this state the nerves were probably pressed against the ossified arteries, which may account for the excruciating pain he felt at those times. The other symptoms may be explained from the defect in the valves and the dilatation of the aorta, which had lost its elasticity.

In Hunter’s day controversy existed concerning the cause of venereal diseases. To test whether one pathogen or more than one was responsible, Hunter inoculated a subject (quite possibly himself) with pus from a patient with gonorrhea. When the subject showed signs of syphilis, Hunter concluded that the theory of a single pathogen was true. Unfortunately, his patient probably had both syphilis and gonorrhea, and Hunter’s conclusion hampered progress in this area for another 70 years.