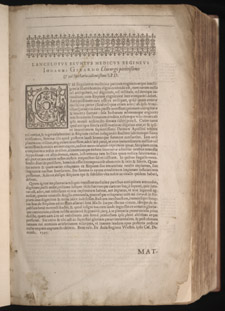 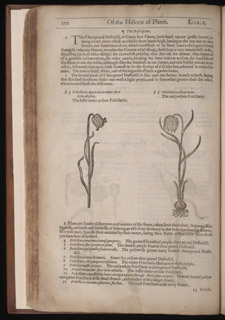 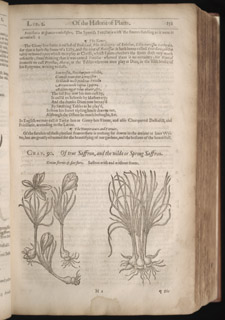 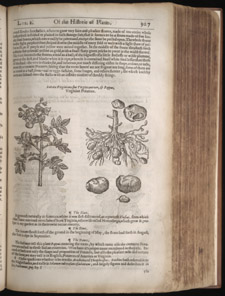 John Gerard was a London barber-surgeon as well as an expert on plants, the source of nearly all medicines during his lifetime. In 1597 Gerard published his Herball, which was a plagiarized translation of a book by Dutch author Rembert Dodoen. Gerard’s innovation was to add a list of plants discovered by explorers of the New World: this included the potato. In 1633 Thomas Johnson published the revised edition of Gerard which we own. Not only did Johnson correct many mistakes in the text, he added about 800 plants and 700 illustrations.

Although Gerard was mostly interested in plants for their medicinal qualities, his pleasant writing style drew those interested in the decorative aspects of plants. Despite the fact that Gerard’s work contains what we recognize today as much mis-information, he advanced plant knowledge and his plant lists set a precedent for later botanical garden catalogues to emulate.

Gerard on the daffodil: “having narrowe leaves, thicke, fat, and full of slimie juice; among the which riseth up a naked stalke smooth and hollow, of a foot high, beaning at the top a faire milke white floure growing forth of a hood.”