The Principles of Surgery. New-York: Printed and sold by Collins and Perkins, 1810. Fulltext available through America’s Historical Imprints (UVa access only) 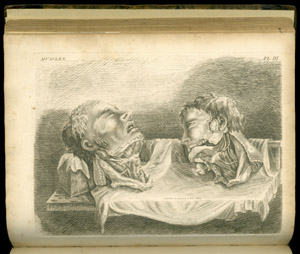 John Bell, Engravings of the Bones, Muscles, and Joints…. In his preface Bell states that he hopes whatever was lost in elegance in his engravings was gained in accuracy. 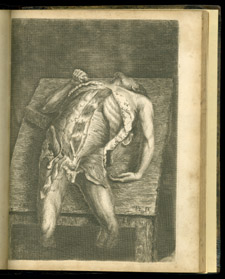 John Bell, Engravings of the Bones, Muscles, and Joints…. “…the body should be laid out as he is to order it in dissection…” 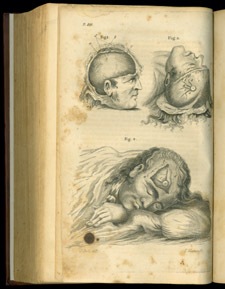 John Bell, The Principles of Surgery. Our book is an abridgement of Bell’s three-volume set, one of his most lasting contributions to surgery. This illustration is in the chapter on “Fractures of the Scull with Depression.”

A noted anatomist and surgeon born in Edinburgh, John Bell gave private lectures on anatomy, primarily to surgeons. Eventually his sessions became so well attended that he built a school to accommodate the classes that he taught for 13 years before concentrating on his studies and large surgical practice. Bell’s books are thorough in reviewing both historical and contemporary treatment and incorporating clinical examples. He was particularly interested in the surgery of blood vessels and was the first to ligate or tie the gluteal artery.

John Bell believed that the artist and the anatomist were often at odds: the artist focused on elegance while the anatomist maintained accuracy and ensured utility. He settled this conflict by doing much of the artistic labor himself. In the Preface to Engravings of the Bones, Muscles and Joints he writes, “I have drawn my plates with my own hand. I have engraved some of these plates, and etched almost the whole of them.”

Bell also states in his Preface to Engravings of the Bones, Muscles and Joints that

…dissection is the first and last business of the student; and when drawings are made for his use, the body should be laid out as he is to order it in dissection; the belly should be displayed as he can display it in his subjects; an arm should be so drawn, that, when he dissects the arm of the subject, it may fall naturally upon the table exactly as he finds it in his book.