An Essay on Diseases Incidental to Europeans in Hot Climates. London: T. Becket and P. A. De Hondt, 1771. Fulltext online

A Treatise on the Scurvy. London: Printed for S. Crowder [etc.], 1772. Fulltext online 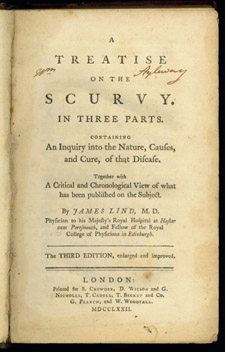 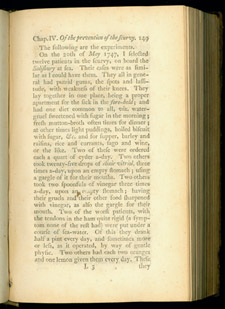 James Lind, A Treatise on the Scurvy. Lind’s experiments were carefully planned. 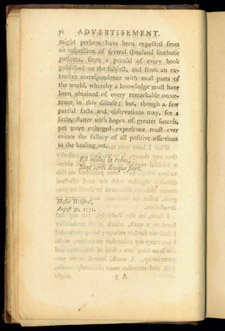 James Lind, A Treatise on the Scurvy. Sadly, Lind concluded, “…experience must ever evince the fallacy of all positive assertions in the healing art.” 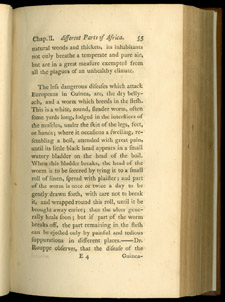 James Lind, An Essay on Diseases Incidental to Europeans in Hot Climates. “…a worm which breeds in the flesh. This is a white, round, slender worm, often some yards long…”

Born in Scotland, James Lind became a surgeon’s apprentice at the age of 15. In 1747, prior to earning a medical degree from the University of Edinburgh, Lind conducted his experiments on scurvy, an often deadly disease common to sailors. While citrus fruit was known to be curative and preventative for scurvy prior to Lind, this was by no means the only treatment used. Lind’s controlled clinical trial proved the consumption of citrus fruit was beneficial, whereas other treatments had minimal or no effect. Unfortunately, in spite of Lind’s clear clinical results, it was more than 40 years after the 1753 publication of A Treatise of the Scurvy before the Royal Navy finally issued citrus juices to seamen.

Lind’s well-planned trials provided additions to the otherwise identical diets of six pairs of men with symptoms of scurvy. The men were kept in the same sickbay with the same care. Four pairs showed no improvement, while the pair supplied with a quart of cider each day showed slight improvement. However, the two sailors given a lemon and two oranges daily made astonishing recoveries.

The third edition may clarify why it took the Royal Navy 40 years to provide citrus products to seamen. In spite of carrying out the clinical experiments himself, even Lind apparently failed to grasp the full import of the results. Although he had observed thousands of scorbutic patients, his Postscript in the 1772 edition promotes remedies with “very different and opposite qualities to each other, and to that of lemons.” At the beginning of the same edition he writes, “ … but, though a few partial facts and observations may, for a little, flatter with hopes of greater success, yet more enlarged experience must ever evince the fallacy of all positive assertions in the healing art.”

Considered the founder of naval hygiene in England, Lind also wrote An Essay on Diseases Incidental to Europeans in Hot Climates, first published in 1768. In it he methodically discusses the diseases encountered in various parts of the world and then gives advice for both the avoidance of disease and the “cure of those diseases which attack strangers in warm climates.” This early work on tropical medicine contains a description of the extraction of a Guinea worm from a person by gently drawing it forth over a period of days, a method still used today.