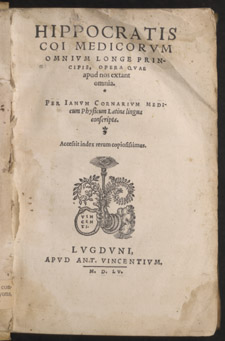 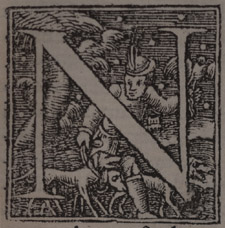 Hippocrates, Hippocratis coi medicorum omnium longe principis…. These initial letters, at the beginning of a chapter or paragraph, are sometimes illustrated with exquisite miniature figures, botanicals or decorative edgings. They are called historiated initials. The word “history” comes from Greek by way of Latin, meaning to tell a story or narrative. 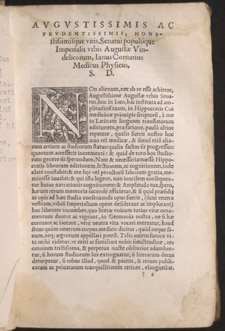 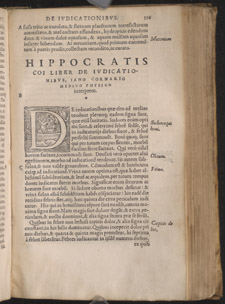 Little is known about the man, Hippocrates of Cos, who lived in the fifth century BCE. But through the writings associated with him, Hippocrates has been credited with developing a system of empirical medicine based on clinical experience, allied to philosophy, and dedicated to the “art” of medical practice. The best physicians distinguished themselves from the rest by practicing this art (techne) which was an approach to diagnosis and treatment based on experience, observation, and logical reasoning. Though attributed to Hippocrates and his school, the Hippocratic corpus was likely brought together in Alexandria, and for centuries exerted a huge influence on the development of Western medicine. The name Hippocrates would be famous today for the Hippocratic Oath alone.

This book is one of the fundamental texts of Western medicine, which first appeared in a printed Latin edition in 1525. Ours is a revised edition, printed 30 years later.

The Hippocratic Oath first appeared in print in a collection of medical texts that has been traced back to the twelfth century and the earliest medieval European center of medical instruction, the School of Salerno. After its Latin translation by Pier Paolo Vergerio (1370-1444), the Oath was widely copied and appeared in subsequent editions of the Articella and other collected works. Beginning in 1525 it began to appear in collected Latin editions of Hippocrates. The Oath has long been a model for moral and ethical standards in medicine, and it endures in modified form to this day. In antiquity, however, it was generally not considered a violation of medical ethics to do what the Oath forbade. Today most American medical school students pledge some version of the oath when they graduate, but there is wide-ranging debate as to what the implications – moral and legal – of the oath are.

Here is a modern translation of the Hippocratic Oath:

I swear by Apollo the Physician and Asclepius and Hygeia and Panaceia and all the gods and goddesses, making them my witnesses, that I will fulfill according to my ability and judgment this oath and this covenant: To hold him who has taught me this art as equal to my parent and to live my life in partnership with him, and if he is in need of money to give him a share of mine, and to regard his offspring as equal to my brothers in male lineage and to teach them this art–if they desire to learn it–without fee and covenant; to give a share of precepts and oral instruction and all other learning to my sons and to the sons of him who has instructed me and to pupils who have signed the covenant and have taken an oath according to the medical law, but to no one else. I will apply dietetic measure for the benefit of the sick according to my ability and judgment; I will keep them from harm and injustice. I will neither give a deadly drug to anybody if asked for it, nor will I make a suggestion to this effect. Similarly I will not give a woman an abortive remedy. In purity and in holiness I will guard my life and my art. I will not use the knife, not even on sufferers from stone, but will withdraw in favor of such men as are engaged in this work. Whatever houses I may visit, I will come for the benefit of the sick, remaining free of all intentional injustice, of all mischief and in particular of sexual relations with both female and male persons, be they free or slaves. What I may see or hear in the course of the treatment or even outside of the treatment in regard to the life of men, which on no account one must spread abroad, I will keep to myself holding such things shameful to be spoken about. If I fulfill this oath and do not violate it, may it be granted to me to enjoy life and art, being honored with fame among all men for all time to come; if I transgress it and swear falsely, may the opposite be my lot. [Edelstein 6]