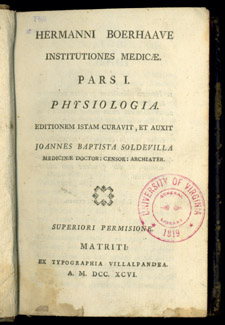 Herman Boerhaave, Institutiones medicae…. Our 1796 edition indicates the longevity of Boerhaave’s teaching. It was published nearly 90 years after the first edition.

In 1701 the Dutch physician, Herman Boerhaave, began a teaching career at the University of Leiden. Boerhaave had an outstanding comprehension of medicine, chemistry, and physics. His engaging personality, lucid lecture style, and good clinical teaching attracted students from all over Europe to attend his presentations. They took his principles and textbooks back home to other medical schools and clinical practices so that his influence on medicine continued long after his death. One of his most esteemed pupils, Albrecht von Haller, called him “communis totius Europae praeceptor” or the general teacher of all Europe.

Boerhaave compiled his most influential work, Institutiones medicae, for the use of his medical students. One of the first textbooks of physiology, it was published in many translations and editions, some without his authority. Unlike certain contemporaries who made major discoveries in medicine, Boerhaave summarized and organized what was acknowledged in physiology and pathology at the time he lived. He incorporated assorted approaches into his work, including the role of the humors.