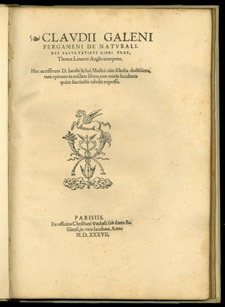 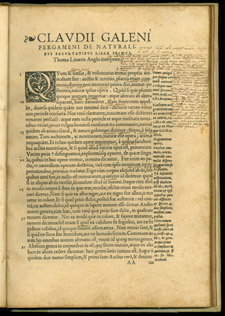 Galen, …De naturalibus facultatibus libri tres. The decoration to the left of the title as well as the historiated initial “Q” are quite similar to that of the 1534 Razi, also printed in Paris but at a different printer’s house. 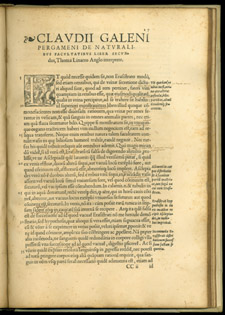 Galen, …De naturalibus facultatibus libri tres. Note the historiated initial with angel, arrow and man in the moon, and the marginalia.

Six centuries after Hippocrates, Galen was born in Pergamon, a center of culture and learning in what is now Turkey. His work represented the apex of the Hippocratic tradition. Bringing together the best writing of earlier Greek physicians and philosophers, Galen’s writings became the basis of medical study that was transmitted to scholars for hundreds of years. Galenism, as it was called, depended upon a system of humors and qualities which needed to be kept in balance. Among these were heat and cold, moisture and dryness, and bitterness and sweetness. This doctrine, carried forward from earlier Greek thinkers to Hippocrates, and then to Galen, provided the basis for medical theory up until the time of the American Revolution and was still practiced well into the nineteenth century.

Because Galen used animal rather than human dissections, he made many mistakes in anatomy as well as other fields of study. Despite this, Galen was the unchallenged medical authority in Western, Islamic, and Jewish medicine for over a thousand years. He utilized logic, experience, and observation in his extensive writings on physiology, anatomy, and pathology.

Galen became particularly important in the Renaissance as a bridge to classical medicine. In the sixth century, medical scholars in Alexandria considered sixteen Galenic works the core texts for medical study. Partly because he was revered in Arabic as well as Western medicine, Galen’s work continued to be copied and studied during the Middle Ages. As Arabic medical studies gradually became assimilated into the canon at the European universities of Montpellier, Salerno, and Bologna, Galen’s authority grew. During the sixteenth century, especially in Basel and Venice, the texts of Galen were translated into Latin from Arabic as well as from Greek.

The 1537 De naturalibus facultatibus and 1547 De simplicium medicamentorum facultatibus both appear as parts of our seven-volume Opera, which was printed in Venice in 1550 by the Giunta family. The Giunta editions of Galen’s complete works, published between 1541 and 1625, are considered among the more important. 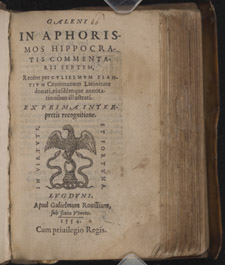 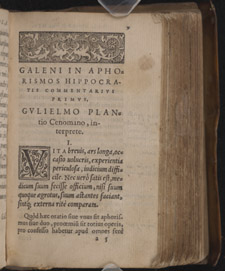 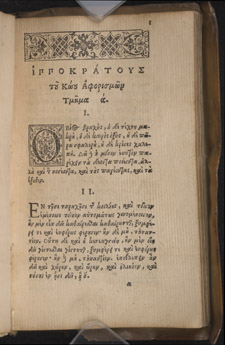 In aphorismos Hippocratis contains traditional proverbs pertaining to health that Galen gleaned from the Hippocratic writings. Much of the medical advice, focusing on disease prevention and moderation in lifestyle, today seems sensibly up-to-date. Such books in this pocket size were common among learned people in medieval Europe. This edition contains both Latin and Greek texts.

“Life is short, the art is long, occasion sudden, experiment dangerous, judgment difficult. Neither is it sufficient that the physician do his office, unless the patient and his attendants do their duty and external conditions are well ordered.” Though this popular Latin saying was widely used by Roman writers and orators, it is generally attributed to Hippocrates, and is placed first in his Aphorisms.

Below are more selections:

“Sleeping or walking, if either be immoderate, is evil.”
“Neither satiety nor hunger nor any other thing which exceeds the natural bounds can be good or healthful.”