Orders Thought Meete by Her Maiestie, and Her Priuie Councell, To Be Executed Throughout the Counties of the Realme, in Such Townes, Villages, and Other Places, As Are, Or May Be Hereafter Infected with the Plague…. [London]: Imprinted at London by Christopher Barker, printer to the Queenes Most Excellent Maiestie, [1593?]. Fulltext online 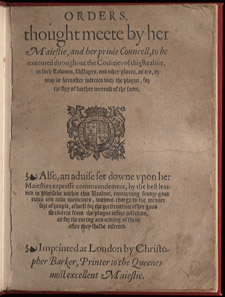 England and Wales. Sovereign (1558-1603: Elizabeth I). Orders Thought Meete by Her Maiestie…. This copy was likely distributed as a pamphlet, which was later bound into a book. The title page explains that it was to be distributed to all towns and places which might be infected with plague. 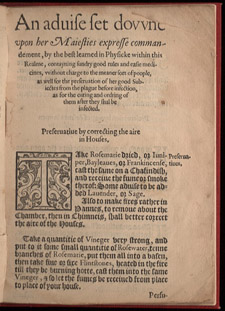 England and Wales. Sovereign (1558-1603: Elizabeth I). Orders Thought Meete by Her Maiestie…. “An aduise set downe.” Here begins the advice for households. The first is a recipe for “correcting the aire in Houses.”

Published under the auspices of Elizabeth I during an outbreak of the plague in England, this presents a fascinating look at public health, epidemiology, and illness in the late sixteenth century. The book contains instructions for the Queen’s emissaries in identifying towns struck by plague and then directs them in how to proceed with taxation, issues related to quarantine, and the handling of the clothing and bodies of those who died. It concludes with recipes for preparing medicines that would, purportedly, prevent the plague or cure it if already contracted.