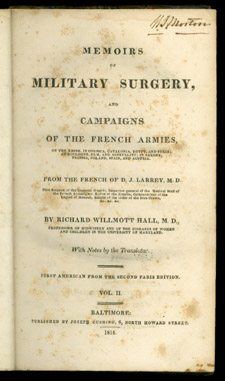 Dominique Jean Larrey, Memoirs of Military Surgery, and Campaigns of the French Armies…. 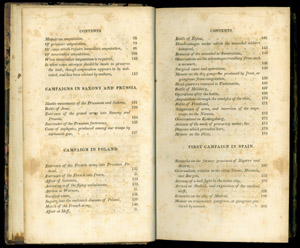 Dominique Jean Larrey, Memoirs of Military Surgery, and Campaigns of the French Armies…. Under the heading “First Campaign in Spain” Larrey shows the wide scope of his topics. He gives an account of a bull fight in Burgos, discusses the regulation of medical staff, remarks on Madrid, and writes a memoir on gangrene.

Born in a small village in the Pyrenees, Dominique Jean Larrey was orphaned at 13 and raised by his uncle who was a surgeon. Eventually he became a field doctor and the chief surgeon to Napoleon. Present at more than 60 major battles, Larrey was injured three times and captured once.

Larrey has been called the “greatest military surgeon in history.” [Morton’s Medical Bibliography 341] He realized the importance of quick care and prompt evacuation of the wounded. He instituted triage and first aid on the battlefield itself before the end of the fighting. He created his “flying ambulance,” a light, horse drawn carriage to speedily remove the critically injured to hospitals away from the battle. His care for the injured was given to men on his side, but also to the opposing forces. He improved methods of wound care, promoted early amputation as a treatment for compound fractures, and was one of the first to successfully perform an amputation at the hip joint. Larrey also published classic accounts of trachoma and trench foot.

Larrey wrote several books detailing his time with the army. Mémoires de chirurgie militaire is his most important and was translated into English by Richard Willmott Hall and published in 1814, two years after the first French edition.