The Anatomy of the Brain, Explained in a Series of Engravings. London: T.N. Longman and O. Rees [etc.], 1802. Fulltext online

A System of Operative Surgery, Founded on the Basis of Anatomy. London: Longman, Hurst, Rees, Orme, and Brown, 1814. 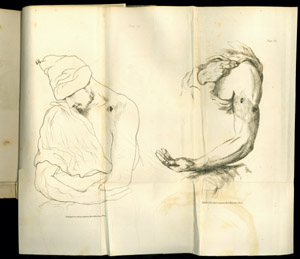 Charles Bell, A System of Operative Surgery, Founded on the Basis of Anatomy. This two volume set is a treatise on general surgery, mainly from the anatomical viewpoint. The illustrations are by Bell and include a series of plates on gunshot wounds. 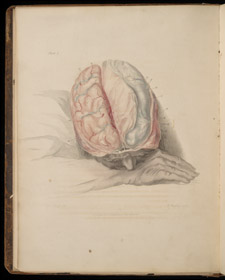 Charles Bell, The Anatomy of the Brain, Explained in a Series of Engravings. Of the 12 plates in this volume, 11 are beautifully printed in color. 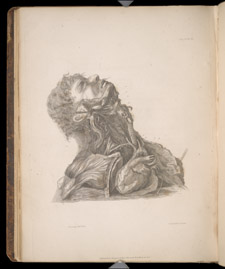 Charles Bell, A Series of Engravings, Explaining the Course of the Nerves. This illustration, drawn by Bell, shows the nerves of the neck.

Sir Charles Bell, like his older brother John, was born in Edinburgh. He worked in London for 30 years before returning to end his career as professor of surgery at the University of Edinburgh. Charles Bell was an expert surgeon and served in that capacity with the British army at the Battle of Waterloo in 1815. His fame, however, rests on medical illustration and neurology. His most notable achievements are his description of the long thoracic nerve or “Bell’s nerve;” his discovery that a lesion of the seventh facial nerve causes facial paralysis, known as “Bell’s palsy;” and his demonstration of function in the spinal nerves: motor function relates to anterior roots and sensory function relates to dorsal roots, the “Bell-Magendie law.”

In his Advertisement at the beginning of The Anatomy of the Brain Bell states,

In the Brain the appearance is so peculiar, and so little capable of illustration from other parts of the body, the surfaces are so soft, and so easily destroyed by rude dissection, and it is so difficult to follow an abstract description merely, that this part of Anatomy cannot be studied without the help of Engravings.

This book vividly shows both the descriptive and artistic abilities of Bell.

Charles Bell is considered a pioneer in the study of the human nervous system. Bound with The Anatomy of the Brain is his work entitled, A Series of Engravings, Explaining the Course of the Nerves.