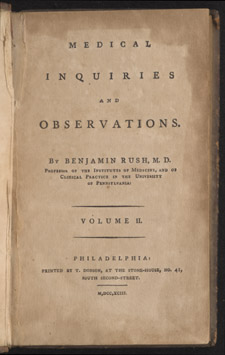 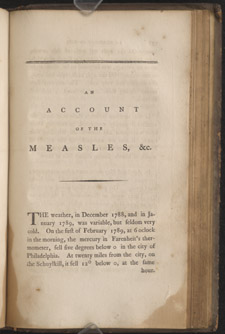 Benjamin Rush, Medical Inquiries and Observations. “An Account of the Measles.”

By the time Benjamin Rush was twenty he had graduated from college and was in Edinburgh, Scotland, for medical school. He became a noted Philadelphia physician and signer of the Declaration of Independence whose actions and beliefs won scorn as well as praise.

Rush is considered by some to be one of the great physicians in American history. He wrote the first American textbook on what we call psychiatry, proposed the study of veterinary medicine, and called for restrictions on the use of alcohol and tobacco. After battling a yellow fever epidemic in Philadelphia in 1793-94, he published his observations and ideas for prevention of the disease.

Well known in the influential circle that included Thomas Jefferson and Benjamin Franklin, Jefferson appointed Rush medical advisor for the Lewis and Clark expedition. Yet Jefferson did not approve of Rush’s reliance on blood-letting, and Rush stubbornly refused to back away from his belief in its efficacy. Rush also blundered politically in secretly declining to support General George Washington in one of his campaigns. When his lack of support was discovered, Rush’s career, at least politically, was tarnished. Nevertheless he continued to be an influential presence in American medicine.