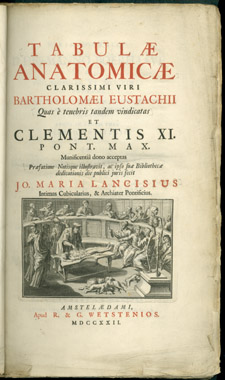 Bartolomeo Eustachi, Tabulae anatomicae…. The title page includes an engraving of a dissection. Note the dogs cleaning up the floor. 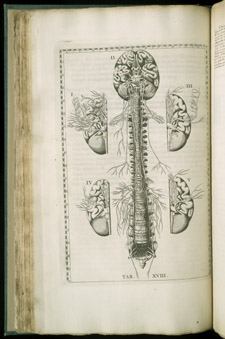 Bartolomeo Eustachi, Tabulae anatomicae…. The Encyclopaedia Britannica printed this Eustachi plate showing the base of the brain and associated nerves in its 1817 edition, nearly 250 years after its first engraving. Eustachi garnered his information from many autopsies so his drawings are general composites that accurately portray the human body. 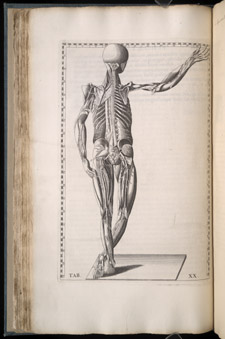 Bartolomeo Eustachi, Tabulae anatomicae…. This figure shows the nerves as seen from the back. The awkward pose of the legs and feet allows more nerves to be displayed. The numbers along the sides of the drawing facilitate the location of the body parts referred to in the commentary. 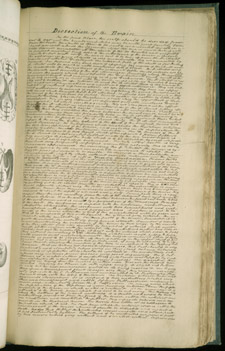 Bartolomeo Eustachi, Tabulae anatomicae…. Our copy contains a medical student’s copious notes about the dissection of the brain.

Bartolomeo Eustachi of “Eustachian tube” fame was a sixteenth-century contemporary of Vesalius. He spent most of his professional career in Rome where he taught anatomy, performed autopsies at hospitals, and carried out dissections. Eustachi’s most famous contribution to anatomy was not available until 140 years after his death. By 1552 Eustachi had drawn and engraved 47 plates showing the human skeleton and muscles, but only eight plates were printed with text during his lifetime. Eventually all of the plates ended up in the Vatican Library. In the eighteenth century the papal physician, Giovanni Maria Lancisi, added explanations to the previously unpublished plates and published the complete set with text. While not as artistically stylish as Vesalius’s work, Eustachi’s volume is sometimes more accurate. If his entire collection of plates had been published ten years after Vesalius rather than 140 years later, it is probable that the two would have been honored as cofounders of modern anatomical study.