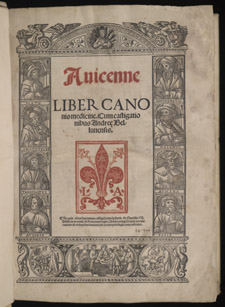 Avicenna, Liber canonis medicine. These woodcut illustrations show authors of classical medical and scientific texts in two vertical columns. In scenes below, physicans appear to be helping patients and instructing others in how to plant and gather herbs. 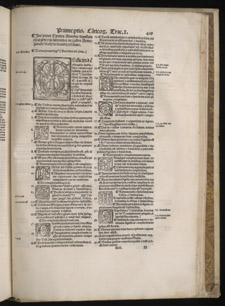 Known in the Western world as the “Prince of Physicians,” Avicenna is the Latin name of the great Islamic doctor and philosopher Ibn Sina. Based on the writings of Hippocrates, Aristotle, Razi (or Rhasis), and Galen, as well as his own observations, Avicenna’s Canon of Medicine codified centuries of Greek and Arabic medicine by bringing together hundreds of pages of classical medical knowledge. Avicenna wrote about epilepsy and described diabetes as well as topics other than medicine that included philosophy, metaphysics, theology, astronomy, and law. He realized that certain diseases were communicable, and he instructed travelers to purify their drinking water by boiling it. The voluminous Canon dominated the medical schools of Europe and Asia for 500 years. It was translated into Latin by Gerard of Cremona in the twelfth century and was first printed in 1473.