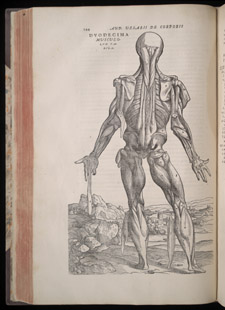 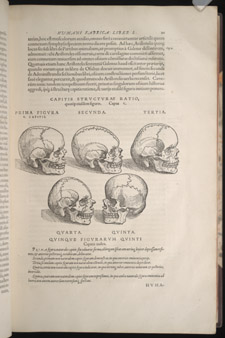 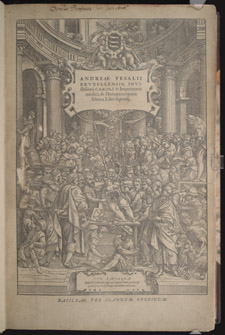 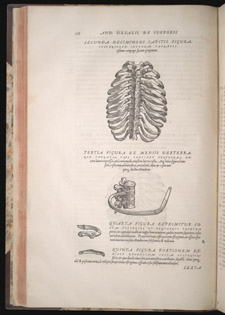 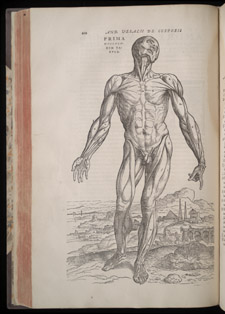 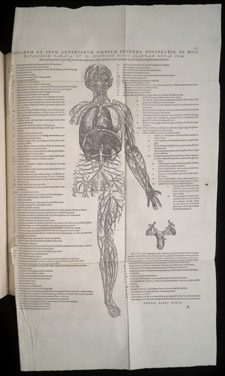 A name revered by students of medicine through the ages, Vesalius became known as the founder of anatomical studies. Born in Brussels, he was considered controversial at times, especially when he taught at the University of Padua, where his anatomical demonstrations and his questioning of the classical masters caused an uproar. Yet, indisputably, he advanced the understanding of anatomy.

Andreas Vesalius’s Fabrica is not only the most famous anatomical book ever published and the foundation of modern anatomy, but a work of extraordinary beauty as well. The seven sections of this detailed book deal with the structure and functions of the various body systems, and the book’s arrangement is innovative in itself. In what was essentially an anatomy textbook, Vesalius provided a fuller description than earlier writers, and he corrected many anatomical errors of Galen. Here for the first time were mostly accurate renderings of human muscles, bones, organs, and nerves. Moreover, Vesalius asserted that physicians themselves must perform cadaver dissections so as to learn sufficient detail of human anatomy.

The more than 200 woodcut drawings are notable for their accuracy, detail, and beauty as well as for their direct relationship to the text. Vesalius oversaw their execution by an artist whose identity is lost to us, but who was likely a student of Titian, and whom some posit was Flemish artist Jan van Calcar. Debate on this subject continues today. What seems certain, however, is that the wood blocks for the illustrations were cut in Venice and transported across the Alps by mule to Basel, where the printer Oporinus received them with strict and copious instructions from Vesalius. Four hundred years later, in 1943, the original wood blocks for the Fabrica as well as those for other books by Vesalius, were destroyed by the Allied bombings of Munich.

Our copy, a second edition, was published in 1555. For reasons we do not know, the title page drawing was recut with many changes from the 1543 original, including, in the foreground, the addition of a goat beside the dog. The whole effect of the scene has a wooden quality not present in the original. Notice how stiff the drapery of the clothing is. Vesalius, with a newly drawn, larger head, is still positioned beside the open cadaver and gestures toward it. The crowded scene of the anatomy theater is probably somewhat accurate, although it has been dramatized for effect. Altogether the perspective and atmosphere that was so admired in the original is lost here.