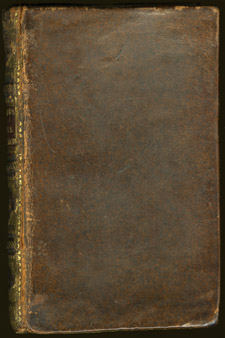 Albertus Magnus, …De secretis mulierum…. This small volume measures about 5 by 3 inches and is clad in a smooth gilded leather. 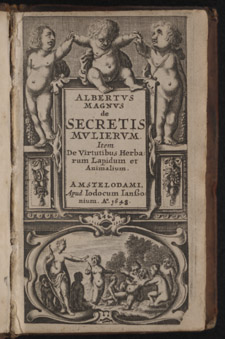 Albert the Great was a German scholastic theologian whose books on theology and science during his lifetime were as influential as the work of Artistotle. A Dominican friar, Albert was among those in religious orders who were forbidden to write about medicine, not because of any ecclesiastical prejudice against medical knowledge, but because of efforts to curb avarice and absenteeism. Albert’s work, which encompassed many other fields of science (science then included physics, mathematics, biology, metaphysics, and philosophy) as well as his writings on morals, political thought, and theology showed why he was called “Great.” These treatises, compiled and published during his lifetime, constituted veritable encyclopedias of science. Perhaps his only intellectual rivals of the period were St. Thomas Aquinas, who studied under Albert, and Roger Bacon.

This volume contains two works purported to be a magical book: On the Secrets of Women, which is a treatise on diseases of female genitalia, and On the Virtues of Herbs, Stones (meaning gemstones) and Animals. It probably was not written by Albert, but took his name in order to sell copies or achieve fame, a common practice before copyright laws were enacted.