The Commissioner’s notice orders that a report made in April 1868 be recommitted and give an account of the liens on the property of the White Sulphur Springs. 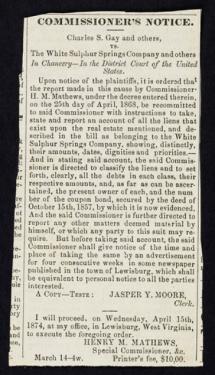 … Upon notice of the plaintiffs, it is ordered that the report made in this cause by Commissioner H. M. Mathews, under the decree entered therein, on the 25th day of April, 1868, be recommitted to said Commissioner with instructions to take, state and report an account of all the liens that exist upon the real estate mentioned, and described in the bill as belonging to the White Sulphur Springs Company, showing, distinctly, their amounts, dates, dignities and priorities.—And in stating said account, the said Commissioner is directed to classify the liens and to set forth, clearly, all the debts in each class, their respective amounts, and as far as can be ascertained, the present owner of each, and the number of the coupon bond, secured by the deed of October 15th, 1857 …