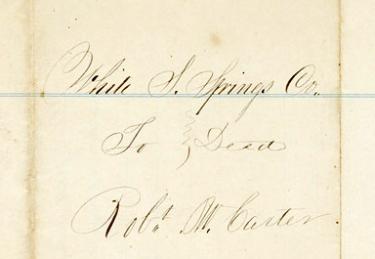 Excerpt from the indenture document

Robert Wormeley Carter (1797-1861) pays $2500 for cottage privileges. He and his heirs have the right to use the cottage, specifically the fourth Cottage in Baltimore row, in perpetuity unless given $500 by the Company. For more information about Carter and other members of his family, see Papers of the Carter and Wellford Family of Sabine Hall.

This Indenture Made the 24th day of December in the year of our Lord 1858 between the White Sulphur Springs Company of Greenbrier Co Virginia of the first part and Robert W. Carter of Richmond Co., Virginia of the second part. Witnesseth that whereas the said White Sulphur Springs Company on the 13th day of August 1857 issued a prospectus which was entered upon its records, which among other things contains the following provisions to wit. A Cottage privilege such as about to be offered to subscribers is the same sort as existing privileges and are as follows. The company to provide the Cottage, but when it is necesary to build one; not to be refused to expend upon it more than one thousand dollars. The purchaser to have the right to the cottage privilege in perpetuity, unless such right be relinquished, as it may be at any time at the pleasure of the company by the payment of Five hundred dollars in cash. The holder of the Cottage to have the right to occupy the Cottage, during the Springs Season as a boarder at the Springs provided he gives ten days notice of his intended visit. The company to have the right to use the Cottage when not occupied or filled by the purchaser, but in filling it, the company to put such persons in it as may be agreeable to the owner: Should it become necessary for the Convenience of the Company, the Company reserves to itself the further right of transferring with the Consent of the owner the privilege from one Cottage to another: And whereas the above named Robert W. Carter hath taken of the said Company a Cottage privilege on the terms and Conditions and with the limitations aforesaid. Now this Indenture further witnesseth That the said White Sulphur Springs Company hath and by these presents doth in Consideration of the Sum of Twenty five hundred dollars in hand paid the receipt whereof is hereby acknowledged and an acquittance granted therefor unto the said Robert W. Carter, Grant, sell, alien and convey unto the said Robert W. Carter his heirs and assigns forever the fourth Cottage in Baltimore row at the White Sulphur Springs in Greenbrier Co., Virginia. …
G. W. Carlyle Whiting
President