Chemical Analysis of the Springs 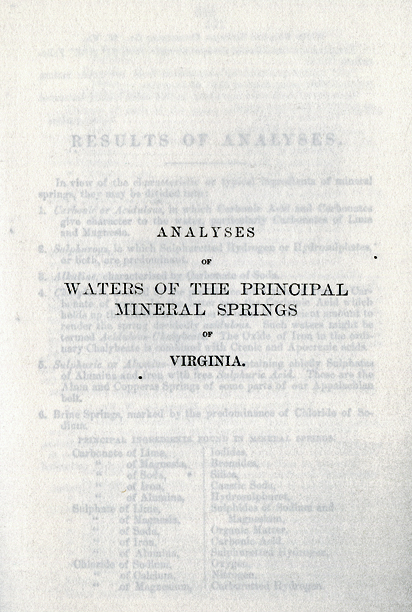 Thomas Jefferson in his Notes on the State of Virginia, originally written in 1781 and 1782, stated, “There are several Medicinal springs, some of which are indubitably efficacious, while others seem to owe their reputation as much to fancy, and change of air and regimen, as to their real virtues. None of them having undergone a chemical analysis in skilful hands, nor been so far the subject of observations as to have produced a reduction into classes of the disorders which they relieve, it is in my power to give little more than an enumeration of them.” {Jefferson, Notes} In 1825 he wrote Fanny Wright “We have taken too little pains to ascertain the properties of our different mineral waters, the cases in which they are respectively remedial, the proper process in their use, and other circumstances necessary to give us their full value. {Jefferson, Writings, 343-44}

Not surprisingly Jefferson was ahead of his time. In 1835, ten years after Jefferson’s letter to Wright, William Barton Rogers (1804-82) was appointed the geologist for the Commonwealth of Virginia. He headed the state’s geological survey from 1835 to 1841 and also was the Professor of Natural Philosophy at the University of Virginia where his brother, Robert Empie Rogers, taught Chemistry and Materia Medica. Following are the results of his analyses of the springs of Virginia. He analyzed ten of the eleven springs Dr. Burke wrote about in his 1846 volume, missing only Fauquier White Sulphur Springs, and including a number that Burke omitted.

For more information about Rogers who was also the founder of the Massachusetts Institute of Technology, see William Barton Rogers. See the Springs in a google map with recent photos.