Yellow Fever Work in North America and a New Vaccine

Personally I believe that it is only a question of about five years to the time when we can look back and see the thing as history. (Letter from Henry Hanson to Henry Rose Carter, August 7, 1925)[1]

Frederick F. Russell followed Wickliffe Rose as Director of the Rockefeller Foundation International Health Board in 1923. He favored the establishment of a laboratory away from both South America and Africa, but where yellow fever viruses from both areas could be studied by doing cross-immunity tests in monkeys.[2] Israel Kligler, a bacteriologist with the West Africa Yellow Fever Commission, pressed “for increased emphasis on laboratory research” and “complained about the dominance of surveys and field work.”[3]Russell’s desire was achieved on June 24, 1928, a month after the death of Hideyo Noguchi, with the opening in New York of the Rockefeller Foundation laboratory with Dr. Wilbur A. Sawyer as director.

One key question that the West Africa Yellow Fever Commission had been struggling to answer was summed up by Hanson, “It is most important that one have considerable familiarity, based on personal observation, with the American type of yellow fever before definitely stating that the fever observed in Africa is not the same as the yellow fever which prevailed in tropical America. In dealing with the symptomatology of human diseases the clinician rarely finds exact duplication of manifestations; one individual may lack some of the cardinal symptoms seen in another who appears to be ill with the same disease, and it frequently happens that one or more of the minor ones are absent.”[4] It was in the Rockefeller Lab that researchers were able to conclusively prove that the African and American yellow fevers were identical. With this hurdle overcome, the task of creating a viable vaccine became the focal point.

The culmination of decades of yellow fever research was the development of the 17D vaccine in 1937. Dr. Max Theiler working at Harvard made the first major step forward in 1930 by showing that “if yellow fever virus is injected into the brains of white mice, a certain number become ill and die,” but “continuous passage of the virus through mice leads to a gradual loss of virulence for rhesus monkeys.”[5] Further research indicated that a monkey which had recovered from a febrile reaction following injection with the yellow fever virus that had been passed multiple times in mice was immune to yellow fever virus from another monkey.[6] Theiler then developed a test to demonstrate an individual’s immunity. Sawyer and Russell recruited Theiler to work with them on developing a vaccine.[7]

According to Raymond B. Fosdick, president of the Rockefeller Foundation from 1936 to 1948, the vaccine was developed in three stages:

It was in the Rockefeller laboratory that a team of scientists, including Dr. Max Theiler, developed the 17D vaccine.  Dr. Theiler won the Nobel Prize in 1951 for his work on the vaccine; he remains the only “yellow fever” scientist recognized with a Nobel.[9] A vaccine was also made from a yellow fever virus, known as the “French strain,” that was isolated in Dakar, French Equatorial Africa (now Senegal). This vaccine was linked to “a high incidence of encephalitic reactions in children” which “led to its use in children under 10 years being stopped in 1961.” Its manufacture was discontinued in 1980.[10] Today only the 17D vaccine is produced with more than “500 million doses distributed since the late 1930s.”[11]

The 17D vaccine is the “only strain currently used for human immunization against yellow fever.”[12] The Centers for Disease Control affirms, “Historically, the 17D vaccine has been considered to be one of the safest and most effective live virus vaccines ever developed.”[13] 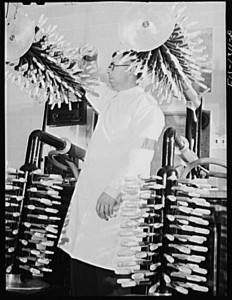 “Inspecting yellow fever vaccine during desiccation.” Courtesy of the Library of Congress.[14] This photo was taken in 1942 at the Rocky Mountain Laboratory which became a “national vaccine factory” during World War II and made vaccines to protect soldiers against spotted fever, typhus, and yellow fever.[15]

Rockefeller’s yellow fever program ultimately stretched for almost four decades with over 75 staff members working at various times. It cost the Rockefeller Foundation over $14 million and took the lives of six scientists.[16] In compiling a history of the International Health Commission’s work in 1951 and reviewing the 422 yellow fever articles published during the program, Dr. George K. Strode stated that the yellow fever story is “full of unexpected turns, unlooked-for puzzles, and unanticipated and exasperating set-backs, as well as triumphs, with steady progress achieved only as a result of firmly sustained and many-sided effort.”[17]

It is a century since William C. Gorgas stated in 1914, “the thing can be done,” when referring to the eradication of yellow fever. Over 85 years ago, in 1925, Hanson predicted that yellow fever would be a disease of the past in a mere five years. However, more than 60 years after Strode published the history of the Rockefeller Foundation’s work with yellow fever, his phrases quoted above still have the ring of truth. Yellow fever outbreaks continue to occur. The World Health Organization estimates “200,000 cases of yellow fever, causing 30,000 deaths, worldwide each year.”[18] With no cure and only symptomatic treatment, the most effective means of controlling yellow fever continue to be “vaccination, mosquito control and surveillance for outbreak in high risk areas.”[19]