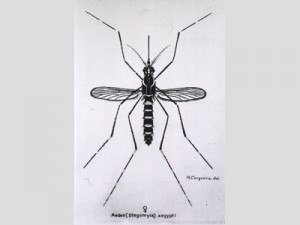 “Aedes (Stegonyia) aegypti” mosquito. Courtesy of the National Library of Medicine.[1] (Translation: aëdes (place of refuge or rest / house) aegypti (of Egypt / Aegyptus, the mythical king of Egypt whose fifty sons married the fifty daughters of his twin brother Danaus.)[2]

The following overview of the state of medical knowledge on yellow fever and its control and prevention during the 1920s and 30s was compiled from Dr. Henry Hanson’s A Study of Sanitary Conditions in Peru with Special Reference to the Incidence of Malaria, published in 1921; The Pied Piper of Peru: Dr. Henry Hanson’s Fight against “Yellow Jack” and Bubonic Plague in South America, 1919-1922, written about 1935 and published posthumously in 1961; and other source materials mentioned in the footnotes. Once the Reed Commission made the monumental breakthrough in discovering the yellow fever vector, the Aedes aegypti mosquito, scientists sought to “control” the mosquito. Its elimination was seen as a crucial component in sanitary measures, and various methods were used, including: 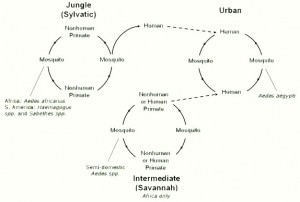 Transmission of the Yellow Fever Virus.[13]

Additional studies showed that mosquitoes other than Aedes aegypti contained the yellow fever virus: Haemagogus, Sabethine, and Aedes lencocelaenus in South America and Aedes africanus and Aedes simpsoni in Africa.[11]

Today researchers describe three transmission cycles for the yellow fever virus: jungle (sylvatic), inter­mediate (savannah), and urban as depicted in the graph created by the Centers for Disease Control and Prevention. The disease is transmitted in the jungle by mosquitoes between nonhuman primates; humans can get the virus when they visit the jungle. The infected person can then take the disease back to an urban area where the virus is generally transmitted from human to human by means of the Aedes aegypti. In Africa, the intermediate cycle involves yellow fever transmission from mosquitoes to humans who live or work in areas near the jungle border. The mosquitoes can be the disease vector from monkeys to humans or from humans to humans.[12]

Although, these discoveries led to the realization that total elimination of yellow fever vectors was not possible, fever fighters today still focus on the control of mosquito populations, as in the Florida Keys where the three basic methods are source reduction or reducing the number of habitat areas for larvae, larval control which targets the immature mosquitoes before they mature into biting adults, and the adult surveillance program which aims to count, collect, and control the adult mosquitoes. The technique of larvae-eating fish espoused by Dr. Hanson is still used.[14]

Previous: Work in North America / Next: An Offer