In 1916, the Rockefeller Foundation Yellow Fever Commission was formed, and work began in South America with studies conducted in Ecuador, Peru, Colombia, Venezuela, and Brazil.[1] Only Guayaquil, Ecuador was deemed an endemic center.  Locating and destroying endemic centers or “key-centers” was crucial to the attack plan.  As Wickcliffe Rose stated, “Endemic centers are the seed-beds without which there can be no epidemics.”[2] Despite the U.S. entry into World War I, a special commission to study yellow fever was appointed in 1918, and experts in clinical medicine, pathology, bacteriology, and chemistry were sent to Guayaquil to search for the causative agent of yellow fever. Interestingly, in 1918, an effort to eradicate mosquitoes in Guayaquil led to validation of Carter’s estimate of a time-frame for elimination. By the end of 1918 there were 25 anti-mosquito squads and by mid-1919, there were no reported cases of yellow fever with the result that for the first time in almost a century the city was free of the disease.[3] 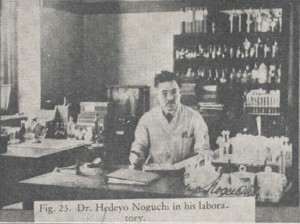 “Dr. Hideyo Noguchi in his laboratory” published in an essay, “The Conquest of Yellow Fever” by James Edward Peabody, Hench-Reed collection.[4]

The Commission’s bacteriologist was a well-known Japanese scientist, Hideyo Noguchi, who had achieved fame at the Rockefeller Institute for Medical Research by successfully “growing the causative agent of syphilis: the spirochete Treponema pallidum (now known as Spirochaeta pallida).”[5]  While working in Guayaquil in 1918, Noguchi identified another spirochete, Leptospira icteroides (“slim spiral, the jaundice resembler”), as the cause of yellow fever.[6]

Noguchi’s claim that yellow fever was caused by a bacterium went directly against the discoveries made by the Walter Reed Commission, specifically by James Carroll, back in 1902. Carroll had determined that the agent that caused yellow fever could pass through a bacteria-proof filter and therefore was smaller than a bacterium.[7]

Following World War I, the Peruvian government recruited Dr. Henry Hanson, stationed with the Army Medical Corps in Panama, to “study sanitary conditions in [the] Province of Lima and the Rimac Valley, with special reference to malaria.”[8] Hanson’s time in Peru began when he was 42 in the fall of 1919 and ended in July 1922 and resulted in work not only on malaria, but also bubonic plague and yellow fever.  In Peru Dr. Hanson met the “Big Four,” as he described them, in yellow fever research: Henry Rose Carter, William C. Gorgas, Joseph Hill White, and Noguchi.[9] It was also in Peru that Hanson had two memorable experiences: he was stricken by yellow fever in Piura not long after arriving; and in spite of understandable, local opposition, he relocated 600 residents of Paita before burning down their rat-infested buildings, thus ending the bubonic plague outbreak.[10]

Just before the burning of Paita, Noguchi briefly visited the town and “decided to test the Pfeiffer phenomenon.” Hanson described the procedure: “To do this they took blood from a group of people who had had yellow fever within the last few months. The blood of such people is lytic to the bacterium or agent responsible for the diseases; which means that when a culture of the organism and blood from such a recovered case is mixed, it causes the etiologic organism to disintegrate, a phenomenon known as bacteriolysis.”[11] Noguchi mixed L. icteroides with blood from people who had been diagnosed with yellow fever and observed destruction of the L. icteroides.[12]

Although Noguchi cautioned in a 1920 article that more testing needed to be conducted and that L. icteroides could not yet be “certainly established” as the inciting agent of yellow fever, he created a vaccine and immune serum from his cultures.[13]

A December 10, 1920 New York Times article that encouraged travelers to South and Central America to get the “Noguchi vaccine” stated, “the efficacy of the vaccine seems to be thoroughly established … there is no ‘kick’ from the vaccine at all.”[14]

The Rockefeller Foundation’s 1921 Annual Report reported that the “experience with Noguchi’s vaccine and serum indicated that the former when properly administered affords a marked protection against attacks of yellow fever, and that the latter if it is used on or before the third day of the onset of the disease reduces the mortality in a striking way.”[15] By September of 1921 over 525 people had been inoculated with the Noguchi vaccine in Peru alone by Dr. Hanson or under his direction.[16]

Noguchi carried on his experiments and continued to have a positive Pfeiffer reaction. In June of 1923 he used serum from Hanson whose yellow fever infection had been four years earlier. In his paper, “The Pfeiffer Reaction in Yellow Fever” he stated that Dr. Hanson was one of the doctors performing the experiments and observations.[17]

In 1926 Max Theiler and Andrew Watson Sellards published an article that raised the possibility that L. Icteroides might not be the causative agent of yellow fever.[18] The Foundation quietly stopped distributing the Noguchi vaccine the same year.[19] Both Noguchi and Hanson would continue their work studying yellow fever in West Africa.

Previous: Brief History of Rockefeller / Next: Why West Africa?