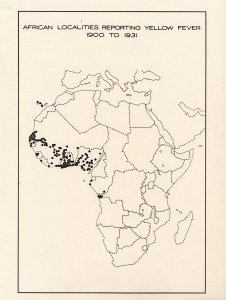 The Yellow Fever Commission that worked in South American also recommended in 1916 that the West Africa coast be investigated.[2] West Africa had been identified in Wickliffe Rose’s 1914 report as a suspected endemic center, largely due to Henry Rose Carter’s long held belief in the origin of the disease. His posthumous work, Yellow Fever: An Epidemiological and Historical Study of Its Place of Origin, published in 1931,concluded that biological and historical evidence made a very strong argument for an African origin of yellow fever.[3]The spread of the disease was a major concern. At a conference held at the Rockefeller Institute, Dr. J.H. White stated “with positive conviction that the presence of the infection in Africa should be regarded as a serious menace as long as it exists; within his own experience he has had under observation a case of yellow fever brought from Africa across the Atlantic Ocean; it is quite possible for it to travel by easy stages from the present infected region in West Africa to Cape Town, up the East Coast and across to the Orient; once introduced into the dense, non-immune populations of the Orient, its control would be practically impossible and the loss of life one would not care to contemplate.”[4]

In 1918 following his four years of service as Surgeon General of the United States Army, General William Crawford Gorgas became the Director of the Yellow Fever Commission of Rockefeller’s International Health Board.[5] World War I delayed the implementation of work in Africa, but in June of 1920 the Commission sailed from New York with the objectives of investigating whether reported yellow fever in West Africa really was yellow fever, and if it was, determining the possibility of instituting control measures. Tragically, Gorgas died on the journey during a stop in London. Although the rest of the Commission’s members continued on to West Africa, their final report recommended, “that its report be accepted merely as a progress report and that another, more fully equipped commission be appointed to carry out a more extensive and prolonged investigation of the situation in West Africa, including a laboratory study of the suspected fevers of the region.”[6]

The African narrative intensified in the mid-1920s when the fight against yellow fever was “drawing to a close in the Americas,”[7] and health professionals, including Dr. Hanson, prepared to join in the “African venture.”  The Rockefeller Foundation’s International Health Division was eager to expand into Africa in its mission to remove “the fangs of yellow fever”[8] from the entire globe. The 1924 Annual Report stated “men are in training and equipment is being assembled for the long-anticipated attack upon its ultimate stronghold –West Africa.”[9]

As suggested by Rose in 1920, the 1925 West Africa Yellow Fever Commission included: “two epidemiologists, two bacteriologists, two laboratory assistants and a secretary.”[10] The Commission members were culled from the Rockefeller Foundation’s staff. One man who particularly wanted to be a member was Henry Rose Carter who wrote in September 1924 that he would give “everything I have, except my immortal soul, if I could spend the next 3 or even 2, years in the Gulf of Guinea- from the Gold Coast to the mouth of the Congo.”[11] Carter’s health prevented him from joining the Commission, but he was influential in encouraging many others to participate, including Dr. Henry Hanson who served from 1925 to 1927.

Hanson was one of the Commission members who kept a personal diary of his time in West Africa. (A diary by the Commission’s director, Dr. Henry Beeuwkes, is available at the Rockefeller Foundation Archives.[12]) On November 22, 1925, Dr. Hanson wrote that he was reading a book, West Africa: A Handbook of Practical Information for the Official, Planter, Miner, Financier & Trader by H. Osman Newland,[13] to familiarize himself with the area.  This book and the West African Pocket Book: A Guide for Newly Appointed Government Officers compiled by direction of the Secretary of State for the Colonies[14]offer glimpses into the British Empire and colonial government, and the preparations that Rockefeller staff undertook before traveling.  West Africa’s reputation as the “White Man’s Grave,” due to the high mortality rates among whites caused by lack of immunity to two diseases, yellow fever and malaria, influenced the Commission’s preparations. While preparing to ship “portable houses of asbestos cement” that would be tightly screened once they arrived in Lagos, Beeuwkes, also requested a coffin be sent. Rockefeller Director, Frederick F. Russell, denied the request.[15]

The British colonies in West Africa during the 1920s and 30s included “Sierra Leone, the Gambia, Nigeria (with the British Cameroons), and the Gold Coast (including Gold Coast crown colony, the Asante empire, the Northern Territories, and British Togoland).”[16] As Hanson discovered, the British governance of all the colonies followed a model (in effect since 1912) established by Frederick J.D. Lugard in Nigeria with the central government comprised of an appointed governor, an executive, and a legislative council. Hanson met many of the British district officers who served as a liaison between the traditional ruler and the colonial regime.[17] This model had an impact on the West Africa Yellow Fever Commission in getting approval from local officials who were seen as crucial for gaining native populations’ cooperation to enable actually carrying out the surveys. Hanson wrote multiple letters to local officials during the early months of 1926, often mentioning that the Commission had the approval of the Colonial Office in London and the full approval of the “Nigerian government” but that they also needed the cooperation of the “Native Administration” to actually start work and carry out the survey.

In one letter recorded in his diary, Hanson stated, “… in my opinion yellow fever is never absent from the larger centers of population such as, Ibadan, Abeokuta, Iwo, Ogbomosho, Ilorin Oshogbo, Ede, Oyo, or Lagos, etc.”[18] In another letter copied in his diary, he wrote to Dr. D. Alexander, the Director of Medical & Sanitary Services for Nigeria. Hanson sought approval and described his work, which would “consist of two divisions, a & b:
a.) A search for evidence of yellow fever among the natives and its relation to the cases, which have occurred among Europeans. This will necessitate a contact with the Native Administration to such an extent that we shall be able to see fever cases as they occur in the leading towns in the Southern Provinces.
b.) A study of the prevailing mosquitoes, more especially those breeding by preference in artificial containers, and in close proximity to human habitation. It has been reported that the Stegomyia, alias Aedes aegypti Linn., Aedes argenteus etc., have different breeding habits in Africa from those found on the Western Hemisphere. It is desired to have an opportunity to observe what these differences may be. These investigations can not be limited to any specific town or city, nor can one anticipate the time required; it might be a question of months or it might mean from 1 to 3 years work, depending on different factors. The process of the above mentioned work would be materially expedited if the Director of the Medical and Sanitary Services would send a note of approval to the authorities in the Districts concerned.”[19]