“This Much Dreaded Disease”: Yellow Fever and the Walter Reed Commission 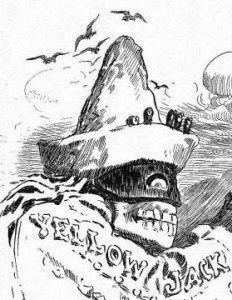 “The First Mountain to Be Removed.” Engraving in Harper’s Weekly, July 1905, by W.A. Rogers. Print acquired by Philip S. Hench from Bettmann Archive.

Dr. Hanson once stated in an article that he “shared the popular fear of this much dreaded disease.”[1] This dread disease, yellow fever, has had many names throughout history, including: Yellow Jack, Terror of the Western Hemisphere, and the Black Vomit.  Hanson described his own experience with yellow fever in Peru and mentioned many of the typical first stage symptoms of “fever, chills, severe headache, back pain, general body aches, nausea, and vomiting, fatigue, and weakness.”[2] Hanson cautioned that convalescing patients could have a “false sense of well being and a desire to get up too soon,” characteristics he applied to himself.[3] Hanson recovered from his bout with yellow fever, but not everyone does.

Roughly 15 percent of yellow fever cases progress to a dangerous stage with high fever, jaundice (yellowing of the skin or eyes, hence the disease’s name), bleeding, and the involvement of multiple organs.[4] Excessive internal bleeding can cause the victim to vomit blood (thus the name “black vomit”). Half of the patients who enter this more serious stage are dead within two weeks; the others recover with minimal or no long term damage.[5] Lifelong immunity is acquired by those who survive the disease and is highly prized as demonstrated by one account, which stated that those who had a certificate of immunity “could command double the wages that he could get before he had the disease.”[6] 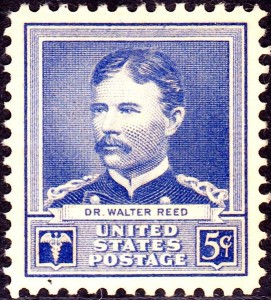 Dr. Hanson published the article about his own yellow fever experience in 1926 and references in it the work of the United States Army Yellow Fever Commission in Cuba.  This Commission (popularly known as the “Reed Commission” after the officer-in-charge, Walter Reed) in 1900 discovered the vector for the transmission of yellow fever: the Aedes aegypti mosquito.  This discovery put an end to the controversy over the spread of yellow fever and provided irrefutable proof that the “fomites theory” which hypothesized that yellow fever spread by direct contact with infected objects (fomites) or infected persons was incorrect.  The Commission members became known as the conquerors of yellow fever.  As the engraving on Walter Reed’s tombstone states: “He gave to man control over that dreadful scourge, Yellow Fever.”  Two exhibits by Historical Collections & Services offer more extensive information on this Commission and its important work in the early twentieth century: the Philip S. Hench Walter Reed Yellow Fever Collection and Yellow Fever and the Reed Commission.  The Reed Commission launched a new era in the fight against yellow fever and led to successful eradication and sanitary campaigns in the Americas; however, there were still obstacles to overcome, including identifying the elusive yellow fever virus and finding a way to vaccinate against the disease.