The University of Virginia Health System in the 21st Century: Patient Care, Research, and Education

The University of Virginia Hospital Expands 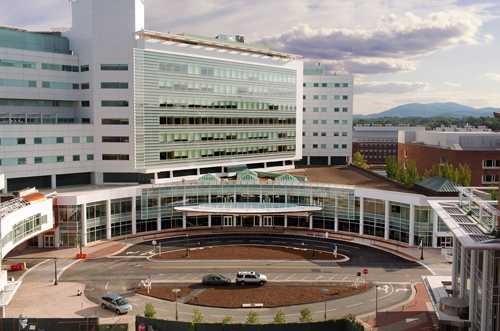 The redesigned Hospital entrance and the wall of glass. Courtesy of Marketing Communications.

The University of Virginia Health System’s longstanding vision to benefit human health and improve quality of life is nowhere more immediately obvious than in the buildings constructed since the beginning of the twenty-first century. The stunning new facilities support the various missions of the academic medical center: patient care, teaching, and research.

In 2004 a four-story structure with 14 new operating rooms significantly increased the hospital’s surgical capacity. Work was completed in 2012 on the front of the hospital, featuring a glazed curtain wall system to maximize natural light for the 72 additional private patient rooms. 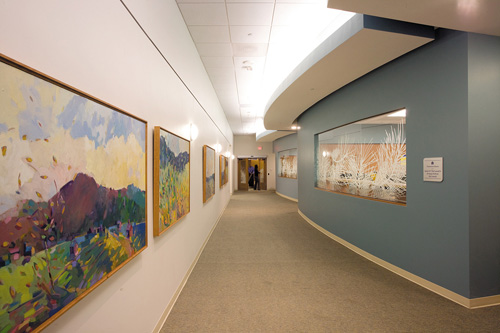 Each floor in the Cancer Center is designed to create a warm, supportive, and inviting environment. Courtesy of photographer Luca DiCecco and UVA Medical Alumni Association.

These expansions, as well as renovations, at the main hospital complex were not the only clinical facilities constructed. Before Virginia State Senator Emily Couric died from pancreatic cancer in 2001, she expressed her desire for a center in the Charlottesville area dedicated to the care of cancer patients and their families. This dream was realized in 2011 when the Emily Couric Clinical Cancer Center, designed to be patient-friendly and provide all the most advanced services, was opened across from the main hospital. 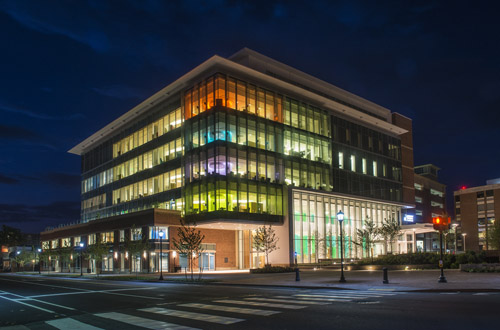 The growth of the Health System extends beyond the vicinity of the main hospital. Multiple outpatient clinics relocated to a new building at the Fontaine Research Park less than two miles from the Medical Center. A 40-bed Transitional Care Hospital, the area’s first long-term acute care hospital, is west of town at the Northridge Medical Park and was dedicated in 2010 for patients with complex medical conditions requiring an extended hospital stay. UVA Medical Park Zion Crossroads opened in 2013, and a number of other established practices were purchased and added to the Health System including ones focusing on cancer, arthritis, and primary care.

The Office of Telemedicine 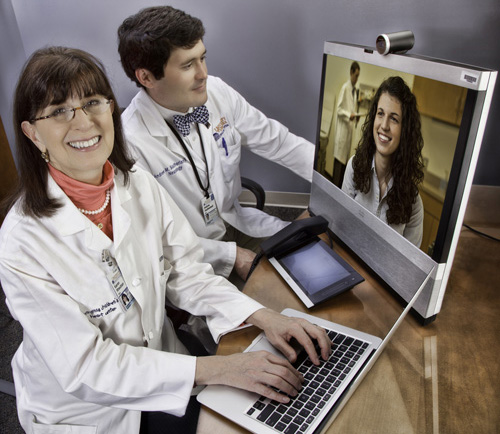 The Office of Telemedicine. Courtesy of Marketing Communications.

The Office of Telemedicine was launched in 1994 to provide specialty medical care and distance learning to underserved regions. It is at the hub of Virginia’s rural e-health initiatives, but reaches far beyond the state’s rural communities into urban areas and the Mid-Atlantic region. By 2013 through partnership with the Swinfen Charitable Trust in the United Kingdom, the University of Virginia had 68 medical specialists able to connect to 260 hospitals around the world. The Office, part of the Center for Telehealth, has served more than 21,000 patients and provided thousands of hours of distance learning for health providers and patients over the years.

University of Virginia Service to the Community 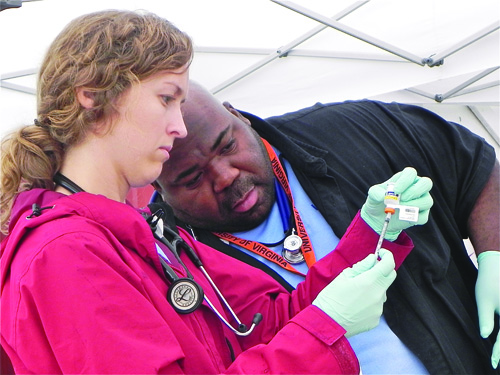 The University of Virginia’s outreach programs are designed to bring resources to the communities served; provide health information; and support patients, families, and University employees as they strive to lead healthier lives. Areas of focus include children’s safety programs, ensuring unused medical supplies go to humanitarian organizations, staffing remote area medical clinics with volunteers, participating in local health fairs, and encouraging donations to the Commonwealth of Virginia campaign. As the needs of supported communities continually evolve, so do the services of the outreach programs.

Pegasus is the Health System’s hospital-based air and ground transport service for critically ill or injured patients. The transport team includes pilots, nurses, and a variety of emergency medical personnel who move about 6,500 patients a year by ambulance and helicopter. Pegasus Air averages approximately 50 flights a month and now lands on the hospital roof helipad to provide a faster, more direct route to the Heart Center.

The Health System launched EpicCare, an electronic medical records system, in more than 140 outpatient clinics across Central Virginia in 2010. In addition to making it easier for clinicians to access patient records, patients can view their own information through MyChart. More than 1.8 million medical record numbers with 3.3 million radiology results, 18 million document images, and 30 million laboratory test results were painstakingly moved from old patient records to the new system. Inpatient areas began using the system in 2011. 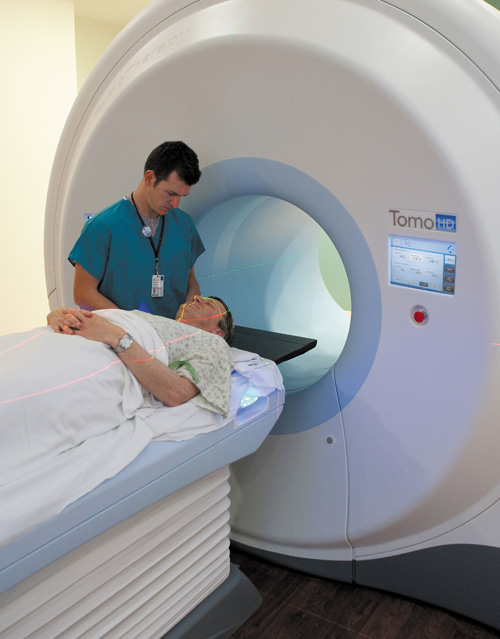 The first X-ray machine at the hospital was purchased in 1910 for $1,000, half of which was paid for by the Chairman of the Department of Surgery with the rest covered by the Hospital Auxiliary and the hospital. What remarkable changes in 100 years! The breath-taking progress in the use of technology and the commitment of the University of Virginia Health System to equip its professionals with tools to deliver the highest standard of care are evident in an array of new equipment with names like the da Vinci Surgical System, the TomoTherapy Hi-Art System, Gamma Knife Perfexion, 3 Tesla magnetic resonance imaging scanner, Artis zeego, InSightec MRgFUS (Magnetic Resonance guided Focused Ultrasound Surgery), and Gamma Knife ExtendTM. The Health System has been at the forefront of acquiring and gaining the expertise to use this state-of-the-art equipment, often being the first in Virginia. 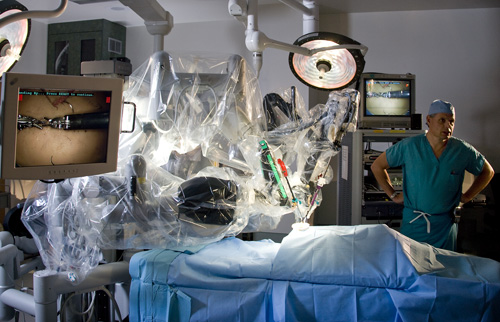 Within a ten-year span these precisely engineered machines have enabled hospital faculty and staff to better diagnose and treat diseases. Improved scanners produce more detailed images of the interior of the body. The da Vinci robotic system offers an option for surgery that is minimally invasive. Physicians use the Gamma Knife, which is not really a knife, to direct and concentrate multiple gamma rays to treat intracranial disorders. Focused ultrasound uses hundreds of individual sound waves to reach deep within a patient’s body. Clinical trials are ongoing to study new ways to use technology to better serve patients. 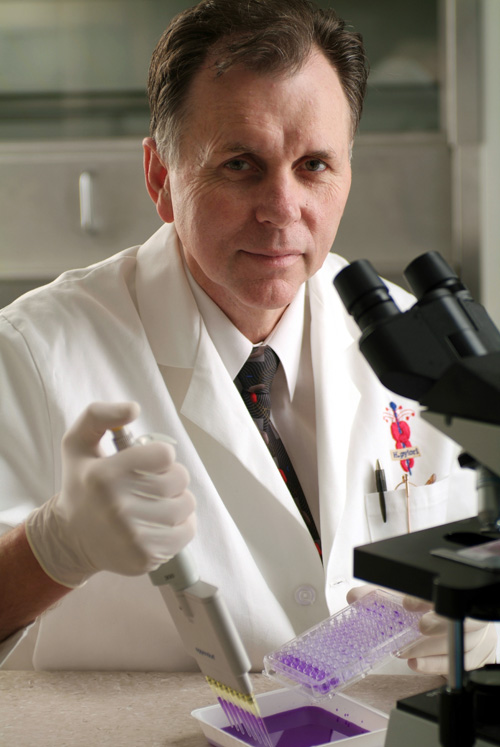 Significant gains in research space were made in the first part of the twenty-first century. Development at the 54-acre Fontaine Research Park started in the mid-1990s. It is home to the Gerald D. Aurbach Medical Research Building which was finished in 2001 and houses both laboratory and clinical facilities of the Division of Endocrinology and Metabolism. The Sheridan G. Snyder Translational Research Building completed the development at Fontaine in 2008 and provides space for scientists who seek to speed the time of taking discoveries in the lab to actual improvement in patient care. It also provides a setting that fosters interdisciplinary research groups. Closer to the Hospital, the Carter-Harrison Research Building (MR-6) opened in 2009 to provide a home to several hundred investigators in cancer, immunology, vaccine therapy, allergy, infectious diseases, and global health.

Barry James Marshall with his long-time collaborator, J. Robin Warren, won the Nobel Prize in Physiology or Medicine in 2005 for his discovery of the bacterium Helicobacter pylori and its role in gastritis and peptic ulcer disease. An Australian, Marshall did much of his work in that country, but spent ten years at the University of Virginia where he was able to extend his research, especially in diagnostics and treatment. He was on the University of Virginia School of Medicine’s faculty as a Professor of Research in Internal Medicine as well as a Clinical Professor of Microbiology at the University of Western Australia when he was awarded the Nobel Prize.

Education at the University of Virginia Health System 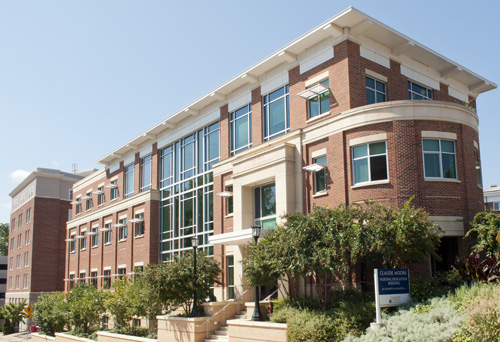 The University of Virginia School of Nursing and the School of Medicine both benefit from new facilities. The Nursing School was forced to deny admission to an increasing number of qualified applicants at a time when a nursing shortage loomed. In 2008 the attractive Claude Moore Nursing Education Building, photo to the left, opened its generous lecture halls and well-equipped classrooms outfitted with the latest technologies. 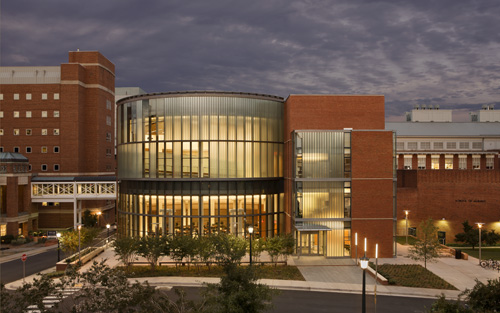 Across the street, the state-of-the art Claude Moore Medical Education Building has advanced features designed for various learning styles and new methods of instruction. Opened in 2010, it features both an auditorium and a learning studio for teaching in the round, critical for the increasingly interactive Next Generation curriculum. 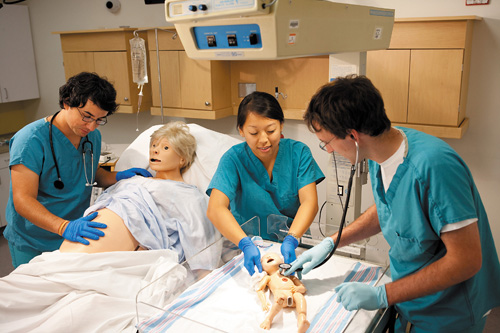 Medical students with birthing and neonatal simulators in the Medical Simulation Center. Courtesy of photographer Luca DiCecco and the UVA Medical Alumni Association. 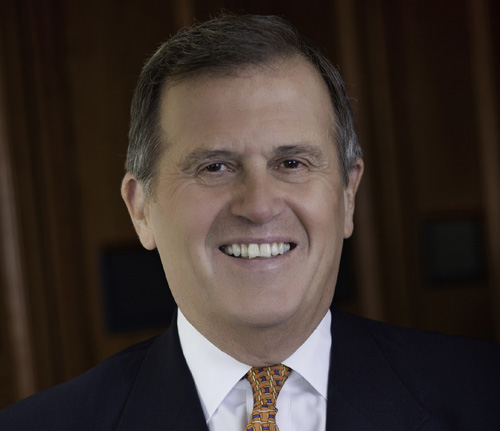 R. Edward Howell, the Medical Center’s Vice President and Chief Executive Officer from 2002 to 2014 was responsible for expansions at the main hospital as well as adding ancillary patient care facilities and research buildings in the Charlottesville area. He established connections with health organizations beyond the local region. EpicCare, the electronic medical record system, was implemented during his administration. University of Virginia President Teresa Sullivan stated, “During an era of significant change in healthcare, Ed and his team have worked well to prepare the Medical Center and the Health System for the future, in particular through the development of an ambitious clinical strategic direction.” 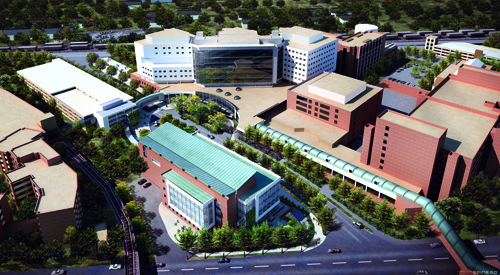 An aerial view of the buildings constructed south of Jefferson Park Avenue. Courtesy of Marketing Communications.

This aerial view of the University of Virginia Health System complex shows the Emily Couric Clinical Cancer Center in the foreground, the new front of the Hospital in the center back, and the Primary Care Center and Pinn Hall (formerly Jordan Hall) to the right.

Previous: History of the University of Virginia Hospital from the 1970s to the Millennium
Next: Credits