In the 1970s, the Hospital Complex grew south, across Jefferson Park Avenue, as seen in the photo. The Josephine S. McLeod Nursing Education Building, in the left rear, and the Harvey E. Jordan Medical Education Building, to the right, were dedicated in 1972. Four years later, the Health Sciences Library linked the Multi-story Hospital to Jordan by building over Jefferson Park Avenue. This innovative use of space was made possible by the Charlottesville City Council which granted air rights. The $11 million Primary Care Center, standing to the left of Jordan, opened in January 1980 with seven outpatient clinics and support services. (Note: In 2016, Jordan Hall was renamed Pinn Hall, in honor of Vivian W. Pinn, a 1967 graduate of the UVA School of Medicine.)

The beginning of the Blue Ridge Sanatorium can be traced back to 1917 when a state senator cited the desperate need for more beds for tuberculosis treatment. In 1978 with this need drastically diminished, the Sanatorium officially was transferred to the University of Virginia and became the Blue Ridge Hospital. It served epileptic, psychiatric, geriatric, diabetic, chemotherapy, and adult rehabilitation inpatients for a number of years.

The Need for a New University Hospital

Within ten years of the Multi-story Hospital dedication, the need for more space was beginning to be felt. By the early 1980s, the situation was becoming critical. Certain departments were scattered among three or four buildings, and some office personnel literally worked in converted broom closets. Faculty had to make do with diminishing research space, outdated utilities were expensive to adapt to work with modern equipment, and patients were intimidated and frustrated with the maze of the Medical Center.

After seriously considering building a new complex on the Blue Ridge Hospital grounds, medical faculty and University administrators determined to keep the Medical Center an important presence on the University’s central Grounds. Expansion would be on land next to the Primary Care Center. In March of 1984, the State Health Commissioner issued a certificate of public need for a $200 million facility, and the state legislature and governor gave their approval. Originally designed to be six stories tall, the new Hospital building gained two additional stories nearly four years later. On March 20, 1989, more than 140 patients moved from the old Multi-story building to the new University Hospital through the 700-foot link. Almost two years after the first patient was moved, the last inpatient was transferred to the eighth floor of the new hospital.

The hospital’s critical care medical transport program, which transfers critically ill or injured patients from smaller hospitals and accident sites to the University of Virginia, is named Pegasus. Started in 1984 with one helicopter, Pegasus had by 1998 transported 10,000 patients and flown more than one million miles. In 2000, a Pegasus on wheels was added to the fleet to complement the air operations and enhance efforts to provide the highest level of pre-hospital care to patients needing transport.

Over the last century, the University of Virginia Hospital has consistently introduced state-of-the-art methods of diagnosis and treatment. This commitment to the highest quality health care has led to an extraordinary level of technological sophistication in the tools available to physicians and nurses. In 1984, the Medical Center installed a lithotripter for the non-surgical treatment of kidney stones, serving some of the first outpatients in the country. The next year, the Medical Center became the first site in Virginia to operate a Magnetic Resonance Imager. Gamma Knife technology came to the Hospital in 1989, and was one of the first in the United States. Physicians use it to perform brain surgery without a scalpel by directing gamma radiation through a shielded helmet with 201 precisely spaced holes.

The photograph at left highlights the centerpiece in the Lungs for Life program, which includes a low-dose spiral CAT scan to detect early cancer of the lungs. More sensitive than an x-ray, this type of scanning allows an earlier diagnosis, which increases the likelihood of a successful outcome to treatment.

The image to the left shows a physician using a laser to treat skin cancer. With their extreme focus of light energy, lasers can be used as a very precise surgical tool. 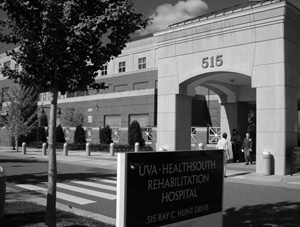 The University of Virginia-HealthSouth Rehabilitation Hospital.

The University of Virginia Health System after 100 Years

The three-tiered facade of the University of Virginia Hospital dominates the frame in this aerial photograph. Juxtaposed to the right is the old Multi-story Hospital. These two buildings are the principal architectural components of a system now comprised of more than thirty-five structures, grown from the single building which a group of far-sighted medical faculty members established in the first year of the last century. And the latest complement of research buildings and support facilities are under construction.

Of course as the name implies, the University of Virginia Health System is far more than a mosaic of buildings and sophisticated machinery. The Health System is most importantly a complex organization of individuals linked together for the very humane purposes of medical care: the alleviation of suffering and the conquest of disease. Initiated a century ago, this legacy of care provides an ample and sturdy framework for a brilliant future.

Previous: History of the UVa Hospital in the 1950s and 1960s
Next: The UVa Health System in the 21st Century