Anatomical Charts in the University of Virginia Health Sciences Library

W. & A. K. Johnston’s Charts of Anatomy and Physiology by Dr. William Turner 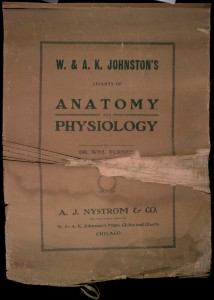 Cover of W. & A. K. Johnston’s Charts of Anatomy and Physiology

Developed by the anatomist Sir William Turner (1832-1916), of the prestigious University of Edinburgh Medical School, the prints evidence the profession’s attention to microscopic anatomy which had come to the fore in the mid-nineteenth century. With the microscope came many of the discoveries that revolutionized medical theories and treatments in the last quarter of the century, marking a final, decisive break with a medical tradition that extended back to the generation before Hippocrates.
Our first eight anatomical charts are from a single set produced in Great Britain and reprinted in several editions into the first decades of the twentieth century in both Britain and America.  The charts were printed by the cartographical firm of W. & A. K. Johnston.

Dr. William Turner joined the faculty at Edinburgh as a demonstrator of anatomy in 1854 and remained at the University for 62 years, the last thirteen of which he served as president.  He published numerous papers on anatomy and anthropology, and was one of the founders of the Journal of Anatomy and Physiology, continued from his death in 1916 as the Journal of Anatomy and still published – electronically – today.

Turner’s charts, which measure roughly 1.75 feet by 2.4 feet, treat eight systems:  1) bones;  2) ligaments;  3) muscles;  4) heart and arteries;  5) veins and lungs;  6) organs of digestion;  7) nervous system;  and 8) organs of sense and voice.  All are given realistic coloring and are keyed by plate numbers and letters to descriptive text – which does not survive in the Claude Moore Health Sciences Library collection.  The tablet of charts would have been displayed in the anatomy laboratory or a classroom of a medical school.  The ones exhibited here were the property of Dr. William Gayle Crutchfield, a professor of neurological surgery at the University of Virginia School of Medicine for 33 years; they are the gift of his son, William Crutchfield.

A second set of charts, Our Bodies, is a series of five charts of which the Health Sciences Library owns only number four, published in 1887. This series is by Charles K. Mills, M.D., and A.H.P. Leuf, M.D., “for teaching Physiology, Anatomy, and Hygiene, and showing the effects of Alcohol on the Muscles, Lungs, Brain, Eye, Nerves, Stomach, Liver, Kidneys, Etc.” Published by Eldredge and Brother, a Philadelphia firm which produced many school and college books, these charts were recommended or advertised in educational publications. Public schools in Akron, Ohio placed Our Bodies charts in each of its primary schools as part of its “course of study in physiology and hygiene, the nature and use of alcoholic drinks and narcotics, and their effects upon the human system, as prescribed for the Akron Public Schools, for the school year 1889-90.” 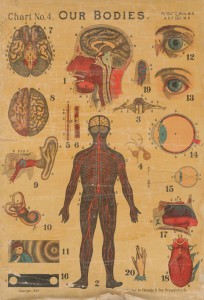 Chart No. 4 of Our Bodies

Our chart number four, which is about 2.3 feet by 3.4 feet, is nearly twice as large as the charts by William Turner. It has 20 drawings, one of a young girl probably about the age of the targeted audience. All drawings, but one, are marked with letters. As with Turner’s charts, the descriptive text explaining the letters no longer accompanies the chart. According to an 1889 issue of The Publishers’ Weekly, the charts sold for $4.50 while the key was more expensive at $7.50.

Both collaborators on the Our Bodies charts, Drs. Charles Karsner Mills and Alexander Hubert Providence Leuf, had an interest in nervous and mental diseases. Their work in mental clinics may have led to their meeting and may explain the emphasis of their chart series on the effect of alcohol on the human body. They were at the University of Pennsylvania at the same time. The University’s Annual Report states that Charles K. Mills, M.D. was appointed Lecturer on Mental Diseases in July 1887, and A.H.P. Leuf, M.D., was appointed Assistant Director of Physical Education in the College Department in October 1887.

Dr. Charles K. Mills (1845-1931) was born in Philadelphia. Following his service in the Union Army during the Civil War, he earned both a medical degree and a Ph.D. from the University of Pennsylvania. The first decade of his career he practiced general medicine, but after 1880 he focused on nervous and mental diseases. He worked and taught at a number of institutions in Philadelphia in addition to the University of Pennsylvania. He authored more than 300 journal articles and a comprehensive book, The Nervous System and Its Diseases: A Practical Treatise on Neurology for the Use of Physicians and Students, which has more than a thousand pages and a generous 459 illustrations.

Dr. A.H.P. Leuf was born in 1861 in New York City. He studied medicine at the Long Island College Hospital, graduated in 1881, and entered general practice. At the Long Island College Hospital he served as an Assistant Demonstrator of Anatomy and worked in the Department of Nervous and Mental Diseases. He was employed at other hospitals in similar roles and also practiced as a surgeon and gynecologist. In 1886 Dr. Leuf relocated to Philadelphia where he became the Director of Physical Education at the University of Pennsylvania and the Demonstrator of Anatomy at the Pennsylvania School of Anatomy. He was an organizer in 1888 of the Association of American Anatomists, a group which is making an impact more than 125 years later. He wrote several books and more than two hundred articles on a surprisingly diverse array of subjects.

Our third set of charts is the Denoyer-Geppert Anatomy Series used in the anatomy laboratory at the University of Virginia. This collection consists of seven educational pull-down wall charts out of a series of probably ten dating from approximately 1945-1950. These huge charts measure 3.5 feet by 6 feet and are about five times larger than the Turner charts. The Library owns KL3: Circulatory System; KL4: Schemes of Circulation; KL5: The Heart; KL6: Topography of Organs; KL7: Lymphatic System; KL9: Digestive System; and KL10: Urogenital System. The KL4 chart is unlike the others which are faithful anatomical illustrations. As the title indicates, it has schematic drawings of the circulatory system and is meant to teach function more than anatomy. 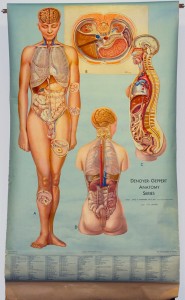 Missing from our collection are KL1: Skeleton Musculature Front View; KL2: Skeleton Musculature Rear View; and KL8: Nervous System. Each brightly colored, paper and cloth chart has from three to six figures with up to a total of 330 identifying numbers and is attached to a wooden dowel from which it once hung on a wall-mounted fixture. Unlike the other sets highlighted in this exhibit, these charts have the key to the numbers at the bottom of each chart so there is no risk of the illustrations and the explanatory key becoming separated.

Denoyer-Geppert International is an Illinois-based manufacturer of scientific models, charts, and simulators, which are produced primarily as teaching tools for health and science education. Founded by L. Philip Denoyer and Otto E. Geppert in 1916, the company initially specialized in geographical maps and globes, but shifted its focus to manufacturing scientific charts and models exclusively. Geppert had been a salesman for W. & A. K. Johnston, the firm which printed William Turner’s charts, our first series. It is probably not surprising that companies which initially printed large maps would add anatomical wall charts to their repertoire as the dimensions of both would require presses that could accommodate large sheets of paper.

Otto Frederic Kampmeier (1888-1981), the editor of the Denoyer-Geppert charts, earned his Ph.D. from Princeton University in 1912 and his M.D. degree from Munich University in 1924. Four years later he became Professor and Chair of the Department of Anatomy at the University of Illinois College of Medicine. Within two years he started the Anatomy Teaching Museum at the medical college. For several years in the 1950s he was Professor and Head of the Department of Anatomy at the Loma Linda College of Evangelists, now Loma Linda University. He was a member of the Association of American Anatomists which Dr. Leuf helped organize the year of Kampmeier’s birth.

Pauline M. Lariviere (1906-1988), a French-Canadian painter and medical illustrator, created the artwork on the Denoyer-Geppert charts. Lariviere studied art in Montreal and London and then medical illustration at the Johns Hopkins University School of Medicine under Max Bodel. Her work has appeared in nursing and medical textbooks, including editions of Grey’s Anatomy. Lariviere’s original images for the Denoyer-Geppert anatomical charts were likely created during the 1940s and were done in oil paint, a favorite medium of the artist and one well-suited to her bold and expressive style.