“Resolved, that it is the sense of this Board that the old Medical Building on West Range be removed at the convenience of the President.” April 29, 1938. [1] 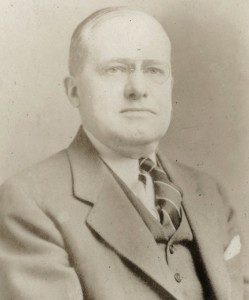 Harvey Jordan, Ph.D. came to the University of Virginia medical school in 1907 to teach histology and embryology. In his History of the School of Medicine at the University of Virginia, he described the Anatomical Hall as he knew it from his arrival until 1924. He said it was a “four-story, unpretentious, square red-brick building, with almost primitive arrangements and equipment.” He gave the uses of the four floors: pathology and bacteriology on the top floor; his own histology and embryology on the street-level floor; a lecture room, called the “Amphitheatre” in the basement; and a furnace and storage area in the sub-basement. [2] He remembered that the building became even more primitive when the furnace was neglected over the 1918 Christmas vacation, and its water jacket froze. This cracked the jacket itself, leaving the medical school without a furnace for two sessions. The faculty and students had to make do with wood-burning stoves. [3]

A columned portico designed by Professor Fiske Kimball, head of the Department of Art and Architecture at the University of Virginia and author of Thomas Jefferson, Architect, was added to the front of the building in 1920. [4] The portico was made under the tenure of Dr. W. A. Lambeth, Superintendent of Grounds and Buildings of the University. [5] Lambeth was also a physician, the University’s first athletic director, and the author of Thomas Jefferson As an Architect and a Designer of Landscapes. 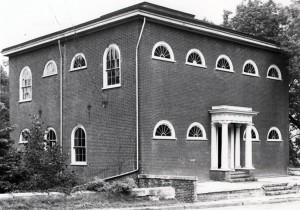 Anatomical Theatre, post 1919. In 1920, a columned portico designed by Fiske Kimball was added to the front of the Theatre. Prints07393, Special Collections, University of Virginia Library, Charlottesville, Va. 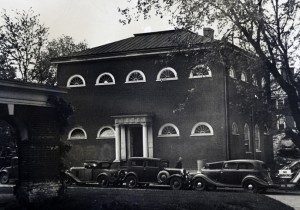 The Anatomical Theatre Condemned in 1924

At the end of the 1923-1924 session, the Anatomical Theatre was condemned as unsafe for medical students. [6] In 1924, the Board of Visitors minutes show a request granted for nearly $3,700 from Theodore Hough, Dean of the School of Medicine, which included funds to pay for the move out of the “old Medical Building” and for 54 chairs to be used by the medical department in the Washington Hall lecture room. [7] Washington Hall, (Hotel B), was located on the other side of the Rotunda at the north end of the East Range. Professors also scattered to the basement of the old Fayerweather Gym, the attic of Cabell Hall, and buildings at the north end of the West Range. [8] It would not be until 1929 that the “new” medical school building opened.

In 1925, a special committee was appointed by the Board to “investigate the condition of the old Medical Hall” with the stipulation that if the building could “be made safe at a cost not to exceed $3,000,” they were to have the necessary work done. [9] The building was deemed salvageable and was reconditioned for the recently formed School of Rural Social Economics. [10]

On Founder’s Day in 1924, the president of the University of Virginia, Edwin A. Alderman, proposed the erection of a new library to replace the University’s central library housed in the Rotunda. Construction was delayed for many years until the University received a grant to cover part of the cost from the Public Works Administration which had been created under the 1933 National Industrial Recovery Act in response to the Great Depression. [11] Groundbreaking occurred in 1936, and the new library, named for Alderman, was formally dedicated June 13, 1938, during Final Exercises. 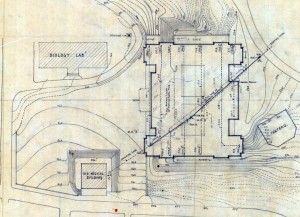 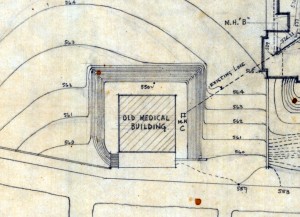 After the expanse of land in front of Alderman Library was leveled, the Theatre, built on the side of a substantial slope, found itself with embankments on three sides and in an increasingly deep hole front to back, more than 15 feet in the northwest corner. According to John Milner Associates who excavated the area in 1997, the Theatre was to have been surrounded by an earthen embankment which would have permitted continued use. [12] 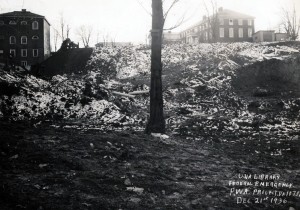 Construction Site for Alderman Library, December 21, 1936. The right side of  the Theatre is to the left of the photo; the back faces Miller Hall which was built in 1868 and demolished in 2002. Prints09543, Special Collections, University of Virginia Library, Charlottesville, Va. 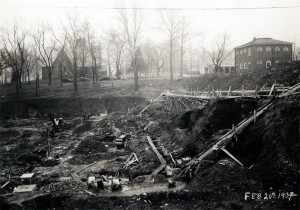 Construction Site for Alderman Library, February 20, 1937. The chapel is to the left; the back and right sides of the Anatomical Theatre are to the right of the photo. Prints09460, Special Collections, University of Virginia Library, Charlottesville, Va. 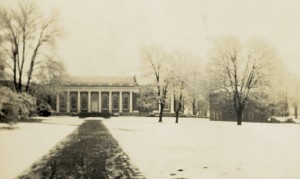 Alderman Library and the Anatomical Theatre, ca. 1938-1939. Alderman Library was formally opened in October 1938, and the Anatomical Theatre was demolished the following summer so this photo was taken in the winter of 1938-1939. Photographs of Francis L. Berkeley, Jr. Charlottesville and the University of Virginia, ca. 1929-1940, Accession #13417, Special Collections, University of Virginia Library, Charlottesville, Va.

Six weeks before the Library’s dedication, John Lloyd Newcomb, the University president who replaced Alderman, had posed the question of the removal of the old Medical Building which by this time was basically a poorly maintained storeroom and a fire hazard. [13] Newcomb asked for the opinion of the Board of Visitors on the issue. Any ensuing discussion was not recorded, but it has been suggested that the presence of the Theatre ruined the vista of the new library, and the following motion was adopted: “Resolved, that it is the sense of this Board that the old Medical Building on West Range be removed at the convenience of the President.” [14] The image to the right shows that both Alderman Library and the Anatomical Theatre coexisted for a time. 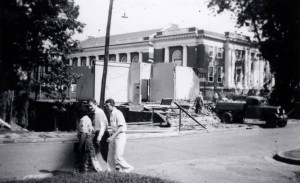 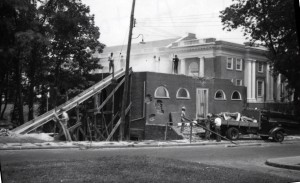 With that 1938 resolution for removal, the Anatomical Theatre was doomed to become the only University of Virginia building designed by Thomas Jefferson to be demolished. It was razed during the summer of 1939, and the area filled and leveled. Harvey Jordan who taught histology and embryology on the street-level floor of the Theatre and eventually became director of the anatomical laboratories and dean of the School of Medicine was still saddened in 1955 by its demise. [15] He wrote, “It seemed to me that this building should be permanently preserved by reconstruction on some other site because of its historical importance in the development of medical education at the University of Virginia, but the authorities were apparently not impressed with this view of the matter. After spending a good part of 17 years in this modest and homely building, I had naturally developed a sentimental interest in its preservation.” [16] Jordan saved one of the bricks to use as a doorstop in his home. Others were used to repair additional Jefferson buildings and the serpentine walls. [17]

Archeological Investigations at the Site of the Anatomical Theatre

Nearly 60 years after the Theatre’s demolition, the Office of the Curator and Architect for the Academical Village hired the firm of John Milner Associates to determine the location of “the [Theatre] building footprint and document the remaining evidence of construction materials and methods.” [18] This was to be done so that “building remnants could be taken into consideration when planning for projects that might disturb them.” [19] Only part of the area was excavated because of mature trees near the site, deep excavations up to 20 feet that were prone to collapse, and the location of the former front of the Theatre under the McCormick Road and sidewalk. 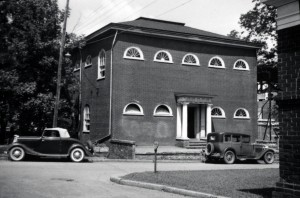 Anatomical Theatre by Atcheson Laughlin Hench, 1937. This shows how narrow the road in front of the Theatre used to be compared to the present-day McCormick Road. Given the width of the road today, the John Milner Associates concluded that the east wall, or the front of the Anatomical Theatre, is under the middle of the sidewalk bordering McCormick. [23] Prints07408, Special Collections, University of Virginia Library, Charlottesville, Va. 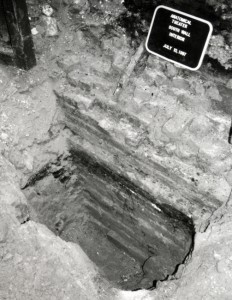 Unable to find documentation about how much material had been removed, the team members hoped to find walls within several feet of the surface on the rear, west side. This was not to be, nor were they able to confirm traces of any remaining foundation on the west side. [20] An additional excavation on the south side was more successful, and the team uncovered compressed coal dust, part of the charnel wall, ash, human bones or bone fragments, and portions of the southern brick wall which was 1.4 to 1.5 feet thick. [21] The firm estimated that 75-99% of the site had been destroyed and removed at the time of the 1939 demolition. [22] 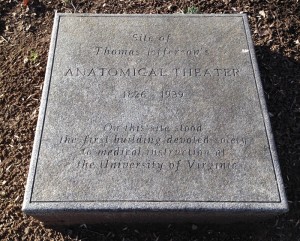 After the excavation, markers were placed at the site of the Theatre. One reads: Site of Thomas Jefferson’s ANATOMICAL THEATER 1826-1939. On this site stood the first building devoted solely to medical instruction at the University of Virginia.

In 2000, within several years of the 1997 report, groundbreaking ceremonies were held for the Mary and David Harrison Institute for American History, Literature, and Culture and the Albert and Shirley Small Special Collections Library whose square footage is 80 percent underground stretching in front of Alderman Library and towards the site of the demolished Anatomical Theatre.

In 2008, a study was done by Rivanna Archaeological Services, (RAS), prior to and in conjunction with new sanitary sewer and storm water lines and structures in the area close to the site of the former Theatre. A two foot wide mortared stone wall, presumably dating to 1825, was discovered that appears in the 1856 View of the University of Virginia, Charlottesville & Monticello by E. Sachse & Co. [24] The excavation also uncovered “the east façade of the terrace basement” which was the below grade area that bridged the gap between the Anatomical Theatre and what was historically West Street. [25] According to RAS the brick walls contain Portland cement-based mortar which dates them as being post 1870. [26] 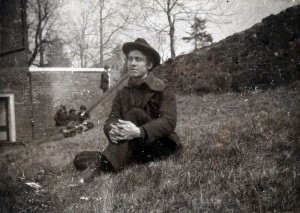 James Bell Bullitt, ca. 1896. James Bullitt was a graduate of the medical school in 1897. Behind Bullitt, notice the terrace basement which joins the Anatomical Theatre and the historic West Street, now McCormick Road. To the right is the stone wall discovered in the 2008 archeological study. Prints09231, Special Collections, University of Virginia Library, Charlottesville, Va. 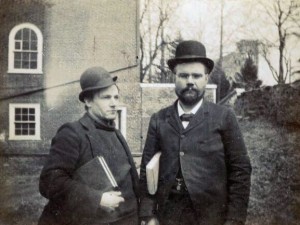 U.M. Carwell and H. Baptista, 1896. Ulysses Carwell was an 1898 medical school graduate, and Hans Baptista was attending his second session in 1896-1897. To the right is the stone wall discovered in the 2008 archeological study. It abutted the historic West Street, now McCormick Road. Prints10525, Special Collections, University of Virginia Library, Charlottesville, Va.

Roughly two centuries have passed since workmen followed Thomas Jefferson’s plan for the Anatomical Theatre to provide Dr. Robley Dunglison with a dedicated building to teach students about anatomy and medicine. The building is gone now with some few remains buried in place, and its bricks scattered to repair other historic buildings or the serpentine walls around the University of Virginia gardens. However, it still sheds light and casts shadows on parts of the University story: the difficulty of anatomical study, particularly before the passage of the 1884 Virginia Anatomical Act; the treatment of enslaved people, even after death; the effect of the Civil War; the fight for financial support for education; human cooperation and obstruction; a missed opportunity for historical preservation; and faculty dedication, far beyond the expected. More than seventeen hundred medical school graduates were taught and studied in the Anatomical Theatre. They scattered and are gone now too, but their legacy of learning and their desire and ability to heal patients affected thousands of lives in the 19th and 20th centuries which in turn affected many in the 21st century. Remarkable changes have occurred since the Theatre was the center of medical education at the University of Virginia. Today there is a state-of-the-art education building, with a medical simulation center; a large faculty devoted to teaching, patient care, and research; a library that provides an outstanding array of resources, and classes that are much more diverse. What hopefully remains constant over these two centuries is the desire of teachers to teach and students to learn, with the goal of improving health care. 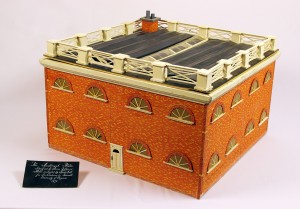 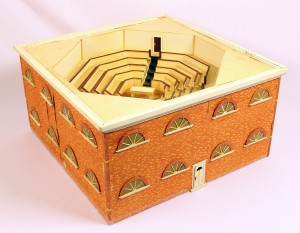 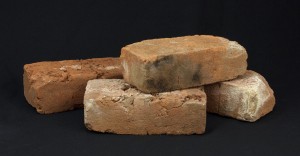 A model of Thomas Jefferson’s Anatomical Theatre was made by Ira L. Full and presented in 1969 to Dr. Chalmers L. Gemmill, a professor of pharmacology who joined the University of Virginia faculty in 1945 and retired in 1972. In addition to being department chair for most of those years, he was very interested in the history of medicine.  This model now resides in Historical Collections in the Claude Moore Health Sciences Library as do four salvaged bricks.