“I ask your attention to the Sky Light of the Anatomical Lecture Room. The sashes are loose & several of the panes of glass are broken – The roof of the Building, too, is in a leaking condition, & the portfolios of Pictures are thereby endangered.”  J.S. Davis, October 7, 1867. [1]

The University of Virginia was spared destruction by General George A. Custer and his Union troops during the occupation of Charlottesville and the University from March 3 to March 6, 1865. Minutes of a faculty meeting following the Union withdrawal report that the institution and its inhabitants fared better than anticipated and, “that very little damage was done to the University property during their sojourn here.” [2] However, the years of war took their toll on buildings, faculty, finances, and enrollment. 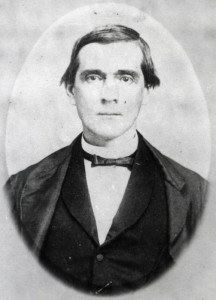 John Staige Davis, ca. 1866-1868. This photo was taken within a year or two of when he penned his letters to University officials. Prints10071, Special Collections, University of Virginia Library, Charlottesville, Va.

Sixteen months after the Army of Northern Virginia surrendered at Appomattox and in response to a Board of Visitors’ inquiry, Dr. John S. Davis wrote a letter to inform the University Rector of his department’s need for additional anatomical illustrations and fresh medical specimens. He pointed out that the war interrupted Henry Scharf’s painting of anatomical illustrations and that the medicines for the materia medica class were in such poor condition that he was forced to borrow specimens from a local druggist.

Dear Sir,
In obedience to the request of the Board
that the members of the Medical Faculty shall
state the most urgent wants of their
respective departments, I beg leave to say,
That my greatest need is for additional Pictorial
Illustrations in Anatomy, and for fresh specimens of
Medicines to assist the lectures on Materia Medica-
The suite of paintings executed for my school by Mr.
Scharf, is of extraordinary beauty & value – But the War
[ended?] his labors, & left the collection incomplete – I shall
be extremely glad, because my Class will be inestimably benefitted,
if we can have the most important deficiencies supplied -
It may not be improper for me to add – that the Artist
works under my constant supervision, and by dissections which
I prepare for him. and that as this involves no expense,
while his compensation is very moderate, the series is worth
several times as much as it cost the University – I have
often been assured that no Anatomical Museum in this
country or abroad is similarly enriched.

The Cabinet of specimens in the Department of Materia
Medica was never adequate nor choice, and having been
in daily use without renewal, for more than sixteen years,
the Medicines have in many cases lost their distinctive
character or been consumed by the examination of many
successive Classes. The consequence is that I have to borrow
articles from the Druggist for exhibition-

Dr. Davis must have continued to borrow medicine from the druggist because about a year and a half later he drew up an extensive “List of specimens wanted to complete a Cabinet of Materia Medica.” [4]

In 1867, Davis wrote a letter to the University Proctor and Superintendent of Grounds and Buildings, J.E. Johnson, about the condition of the Theatre building itself and asked that attention be given to the loose sashes and broken panes of glass in the anatomical lecture room skylight as well as the roof which “is in a leaking condition” and “endangering the portfolios of Pictures,” most likely the ones done by Mr. Scharf. [5]

Perhaps, the requests for repairs and supplies were eventually fulfilled because the Catalogue for 1871-1872 states, “The equipment of the Medical Department in apparatus, specimens and drawings is extensive and excellent.” It describes Mr. Scharf’s paintings as numbering in the hundreds and, “unequalled by anything of the kind in the United States, or perhaps abroad. … They delineate the tissues, muscles, heart and blood vessels, brain, spinal marrow and nerves, the organs of sense, the thoracic, abdominal and pelvic viscera, and indeed all the structures and organs of the human body with admirable accuracy and distinctness, and are of great value as helps to lucid instruction in the branches to which they relate. In all the other branches, the appropriate means of illustration of every topic of discussion are likewise at hand, and are duly utilized.” [6]

The Catalogue continues, “The Department furnishes every facility for the study of practical Anatomy that can be furnished in similar institutions elsewhere. Adequate provision is made for the supply of subjects, and each student has the opportunity, by actual dissections under the guidance of the Demonstrator of Anatomy, of acquiring a practical knowledge of the structure of the human body in all its parts.” [7] Fifteen years after this glowing report in the Catalogue, the department would suffer a calamity.

Fire in the Anatomical Theatre 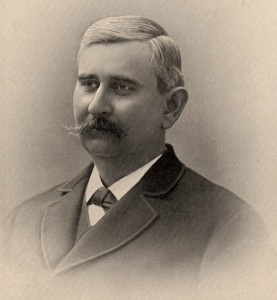 William B. Towles, 1880-1881. Dr. Towles graduated from the U.Va. medical school in 1869 and returned three years later as demonstrator of anatomy. He succeeded Dr. John Staige Davis in 1885 and served until his death in 1939. Prints08141, Special Collections, University of Virginia Library, Charlottesville, Va.

On November 20, 1886, nine years before the disastrous blaze that gutted the University Rotunda, the Anatomical Theatre, or Medical Hall as it was then referred to in Board of Visitors minutes, was partially destroyed in a fire of unknown origin that started in a third-floor bathroom. The brick walls of the building remained sound, the lecture room on a lower floor sustained little damage, and the anatomical models were rescued as were all the paintings and instruments belonging to the chair of physiology and surgery and the chair of the practice of medicine and obstetrics. Unfortunately, the roof and some interior spaces were destroyed along with the anatomical paintings made before the Civil War by Henry Scharf. William B. Towles, the professor of anatomy at the time of the fire, downplayed the loss of the paintings in terms of teaching. He indicated they were considered valuable as works of art, but were little used as he taught “almost entirely from the ‘subject.’ ” [8]

Dr. Towles was in charge of plans for rebuilding and worked to renovate the Theatre “in a manner to insure the greatest comfort and convenience.” [9]  Construction did not proceed quickly enough to open in spring 1887 as predicted, but by fall, the Theatre, minus the cupola and the railing of the previous structure, was ready for new classes. [10] The inaugural day of October 25, 1887, occurred less than a year after the fire, and more than a hundred people attended the formal opening in spite of the inclement weather of rain, sleet, and snow. 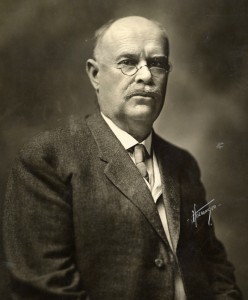 Dr. Paul Barringer, a graduate of the University of Virginia medical school in 1877, gave a well-received address he titled, “A History of the Medical Department of the University of Virginia – Its System of Education and Its Results.” [11] In January 1888, money was appropriated by the Board of Visitors to defray the cost of 400 copies of the Virginia Medical Monthly, which contained the address that had been printed in the North Carolina Medical Journal two months earlier. [12] In June 1888, the University Proctor gave a financial report on the reconstructed building. [13]

No delay in classes occurred during construction. A temporary lecture room for anatomy was erected near the Dissecting Hall while other medical professors moved to the “main building of the University,” probably referring to the Rotunda or the Annex to the Rotunda. [14] In January 1888, the Board of Visitors resolved that the “temporary frame building heretofore used by the Prof. of Anatomy be turned over to the Medical Faculty of the University, to be used in connection with the Charlottesville Hospital.” [15] Apparently, Dr. Towles did not move his classes back into the Theatre as in 1887 it was recommended that $2,000, to include $500 from insurance money on the contents of the Theatre, be appropriated to erect a permanent lecture room for the Professor of Anatomy. [16] This permanent lecture room was likely the north wing of the Dissecting Hall which had room for faculty, instruction, and dissecting tables. [17]

Inspection of the Anatomical Theatre in the 1890s 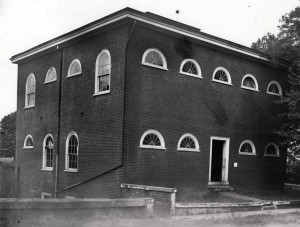 Anatomical Theatre, post 1886. This photo shows the Theater as rebuilt in 1887 after the fire a year earlier. The railing and cupola were not replaced. Prints07392, Special Collections, University of Virginia Library, Charlottesville, Va.

In 1893, the Board of Visitors engaged Mr. Charles H. Read, Jr., a prominent architect from Richmond, Virginia, to examine the building and attest to its safety and stability, which were in question. His detailed report, dated December 15th, provides a unique description of both the inside and the outside of the building. Read declared that he had inspected the Medical Building on the West Range with the assistance of Professor W. H. Echols, the Superintendent of Grounds and Buildings, and described his methodology and careful measurements. He found that the front wall “dishes inward towards the top,” … “an outward bulge” was at the rear, and there was “some departure from a true vertical” on the north or right wall, but concluded, “the walls were found to be exceptionally true for a building of this character.” His assessment was that any slight variances had been present since the beginning when the building was constructed “with no interior brick walls above the Basement, nor any pilasters on the outside or inside to stiffen the long reaches of about forty ft. & help to keep them true.” [18] Finding “no external signs of any changes in the position of the walls since it was erected,” he considered the building “as safe now as it has ever been, & that with the proper amount of care & looking after needful to the preservation of all building property; can be kept so for an indefinite number of years.” [19]

He described the interior above the basement as being of frame construction with the “middle portion of the floors being carried by joists resting on strong girders of short spans, which are supported by stout wooden columns, the lowest series of which rest on brick partition walls in the basement.” He found these supports in good condition. [20] 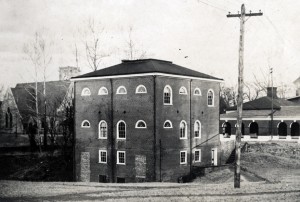 Anatomical Theatre, ca. 1901? This photograph from the turn of the century shows the left side and back of the Theatre. Note the bricked up door to the charnel in the back right and the bricked up area to the back left that eliminated two windows. University of Virginia Photographs, 1901?, RG-30/1/3.093, Special Collections, University of Virginia Library, Charlottesville, Va.

Mr. Read suggested extra bracing on the hip roof and rebuilding the chimney at the rear. His final statement to the Board was, “it is, I think, proper that I should call to your attention the fact that – ‘The Life of a Building’ – is prolonged in proportion to the care taken of it.” He then explained that one had to replace material inside the building that had worn out and also prevent the elements on the outside from causing disintegration because of a neglected opening or crevice. Mr. Read stated that in his opinion the expenses of the improvements would be $150, a sum that was then appropriated to cover the recommended repairs. [21]