“I sometime ago stated to Mr Nelson [Nielson], my wish that the upper Room of the Anatomical Theatre which is appropriated for a Lecture Room might as a matter of favor be first completed – he has not chosen to do so as a favor and I therefore wish that you would be kind enough to require it of him as a right.” Robley Dunglison, September 8, 1826. [1]

In May 1825, the construction of the Anatomical Theatre at the University of Virginia was finally underway. Thomas Jefferson’s choice of location was the side of a deep ravine west of one of the service hotels and Pavilion I. It was set along historic West Street, roughly where McCormick Road is now. Lumber purchases for the building were noted in May and August of 1825. [2] The laying of bricks, and lots of them, was started by the end of 1825. [3] Jefferson estimated on his architectural drawing that the Theatre would take “4,000 bricks for every foot of it’s [sic] height from the foundation to the roof.”

In his last year of life and in poor health, Jefferson remained a driving force behind the completion of the Theatre. As Rector of the University, he was responsible for reporting back to the state’s Literary Fund which had been established in 1810 by the Virginia state legislature to support public education. [4] His charge was to give “a full account of the disbursements, the funds still on hand, and a general statement of the condition of the said University.” [5] His October 1825 report declared, “an additional building too for Anatomical dissections and other kindred uses, was become necessary, we are endeavoring to put these into a bare state for use, altho’ with some jeopardy as to the competence of the funds.” [6] In February 1826 Jefferson expressed his frustration to his fellow Board of Visitors member, James C. Cabell, that progress was so slow on both the Rotunda and the Anatomical Theatre. He wrote, “Till the latter is in a condition for use, there can never be a dissection of a single subject.” [7]

Two months later in April 1826, Jefferson apologized that he had to be the “official organ” of criticism directed to Arthur S. Brockenbrough, the University proctor, when he wrote, “We are not satisfied with the slowness with which the buildings have been conducted the last year, and particularly with respect to the library, and the anatomical theatre. These ought to have been done before this … a greater force of workmen ought to have been employed, and it is now requested that all which can be employed be immediately put into action first for the completion of the library room & shelves, and next the anatomical building.” [8] Sadly, the lengthy time frame for construction meant that Jefferson would not live to see the completion of the Theatre building before he died July 4, 1826.

Drawings of a Building Designed by Thomas Jefferson 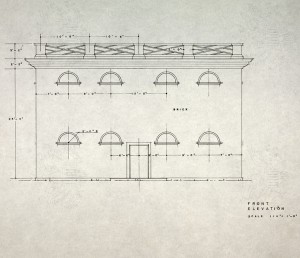 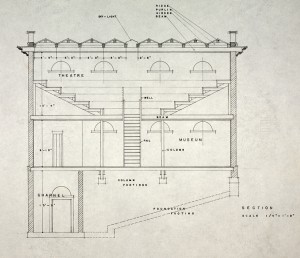 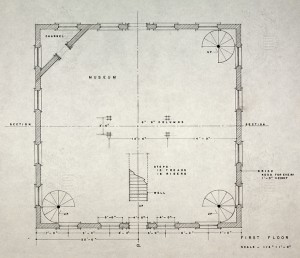 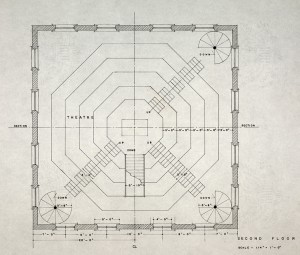 The Historic American Buildings Survey (HABS), under the U.S. Department of the Interior National Park Service, was established in 1933 as the first federal preservation program. These measured drawings of the Anatomical Theatre are based on Jefferson’s plans. Jefferson drew the front elevation, a cross section, the first floor with a museum, and the second floor amphitheatre, as shown above. The Survey added three more elevations extrapolated from Jefferson’s originals: the left side, right side and back, as shown below. Done between 1951 and 1961, they were made more than a decade after the actual Theatre had been demolished. The HABS generally documents existing buildings which indicates the significance the Survey assigned to Jefferson’s Anatomical Theatre. 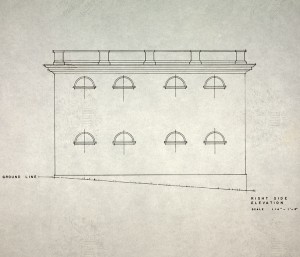 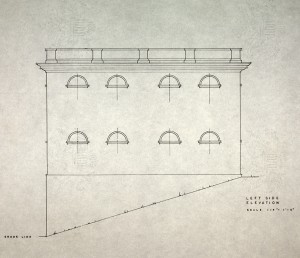 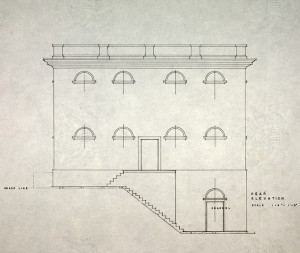 Extrapolated Back Elevation. All images from Measured Drawings of Building Designed by Thomas Jefferson, 1951-61. Accession #5946, 5946-a, 5946-b, Special Collections Library, University of Virginia, Charlottesville, Va.

Construction of the Anatomical Theatre Continues after Thomas Jefferson’s Death

After Jefferson’s death, workmen continued to toil both inside and outside the Theatre, but not always where Professor Robley Dunglison wanted them. Exasperated, he, too, wrote proctor Brockenbrough, “I sometime ago stated to Mr Nelson [Nielson], my wish that the upper Room of the Anatomical Theatre which is appropriated for a Lecture Room might as a matter of favor be first completed – he has not chosen to do so as a favor and I therefore wish that you would be kind enough to require it of him as a right.” [9] Nielson was working at the Theatre but on a “lower floor which may not be wanted for a considerable period.” [10]

By October 1826, construction on what was termed the Anatomical Hall was estimated to be three-fourths complete. [11] James Madison, who had assumed the duties of Rector of the University after the death of Jefferson, informed the state, “The work in the Anatomical hall is so far advanced that it may be used early in the next session.” [12] Madison was referring to the third session which would commence at the start of February 1827. Payments were made for laths, brickwork, and lumber in February and April of 1827. [13] Later payments in 1827 include disbursements for nails, freight for boxes of glass, stonework, plastering, additional lumber and laths, and whiskey for the stonemason. [14] Seemingly, the last Theatre construction payment was made for stone work in January 1828. [15]

The interior of the Theatre as actually built was apparently never documented so it is difficult to know how closely the building followed Jefferson’s original plan. Clearly, some alterations were made to the overall building which would have affected the inside space. Jefferson’s drawing shows two complete floors with the charnel area as the only finished section on the lowest level below the first floor. However, early minutes from the Board of Visitors mention rooms in a basement, and in his 1952 work, the former histology professor and medical school dean, Dr. Harvey Jordan, refers to three floors plus a sub-basement. [16] 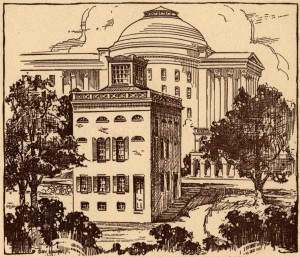 Anatomical Theatre, by Charles C. Haskell and Co., undated. This sketch shows the Anatomical Theatre after the addition of the cupola which was probably added when a new roof was installed following an 1837 resolution. Prints07397, Special Collections, University of Virginia Library, Charlottesville, Va.

The sketch to the left is from a series illustrating the development of medicine in the South by Chas. C. Haskell and Co. of Richmond, Virginia. Jefferson’s drawings show the charnel, a place for cadavers or body parts, as the only room on the lowest level. However, this sketch of the 19th century Theatre shows one row of windows level with the top of the charnel door on the rear wall as well as an additional set of windows below, indicating there were probably at least three or four full floors in the building, not just the two that Jefferson drew. In terms of the exterior, Jefferson drew eight lunette or half-moon windows for the back of the Theatre and another eight for the front. Earliest images of the building show nine half-moon windows in the front and a total of 14 windows in the back, comprised of six half-moon windows and eight variously sized rectangular windows, two with lunettes. 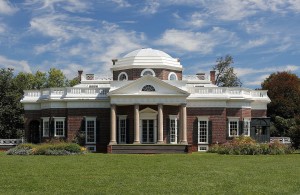 Thomas Jefferson’s Monticello. Chinese Chippendale railings on Monticello’s uppermost roof, railings on its flat roofed terraces, and lunette windows are similar to those at the Anatomical Theatre. These design features are also found at his Poplar Forest retreat. By Martin Falbisoner via Wikimedia Commons.

Jefferson’s drawing of the Theatre’s roofline shows Chinese Chippendale railings, similar to those used at his home, Monticello, and his Poplar Forest retreat. His plan for the railings was followed, but not without dissent from proctor Brockenbrough, who wanted a simpler design to curtail expenses. He wrote, “I do not recollect how the roof is finished agreeable to Mr Js: design, but I find D & Neilson is geting [sic] lumber for an expenceve Chinese raling [expensive Chinese railing] around the top, this, if left me whether the original design or not, I think I should stop, a plain plinth like Pavilion no 8 over the Cornice is quite sufficient.” [17]

Rector James Madison had predicted that the Theatre would be usable by early 1827, and presumably Dr. Dunglison’s effort to have the workmen finish his lecture room prior to other spaces in the Theatre was successful. This is supported by Madison’s report to the state, dated July 19, 1827. He wrote that the dissection area was still unfinished, but did not mention any difficulties with the lecture room. He discussed the new position of demonstrator of anatomy and surgery with duties consisting of “delivering lectures on Anatomy and Surgery, and in conducting dissections and demonstrations.” The designated room in the Theatre for these purposes “will be completed early in the next session, commencing on the first of September.” [18] Dr. Thomas Johnson was hired as demonstrator of anatomy and surgery for the third session of classes which ran from February 1 to July 20, 1827, but it was not until the fourth session, which began in September 1827 and went into 1828, that it was possible for a student to enroll in an anatomy course separate from the medicine course. [19]

According to Dunglison, it became apparent that the opening of the Anatomical Theatre as well as the addition of more professors to teach classes in practical anatomy, surgery, and medicine (in addition to hiring Dr. Johnson, the University added materia medica to Professor John P. Emmet’s offerings for the third session) provided the necessary training to educate physicians. [20] In 1828, at the end of the fourth session, three students received the first M.D. degrees from the University of Virginia. [21] Over the next 20 years, there were more students registered for anatomy than surgery, a total of 901 to 852. [22] In those 20 years, there were 186 graduates from the School of Medicine.

The Anatomical Theatre Used As a Dispensary 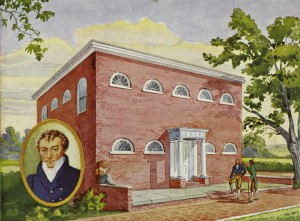 Anatomical Theatre with inset of Dr. Robley Dunglison, undated. Dr. Dunglison, the first medical school professor, and the other figures are in 19th century attire, but the building is as it looked after 1920. It is lacking Jefferson’s railing, and there is no cupola which dates it after the 1886 fire. The columned portico was added to the rebuilt Theatre in 1920. Edwin M. Betts Memorial Collection of University of Virginia Prints, Photographs and Illustrations, 1817-1930, Accession #7073, 7073-a, Special Collections, University of Virginia Library, Charlottesville, Va.

Another potential use for the Anatomical Theatre was suggested in the spring of 1826 when the building was only partially finished. The Board of Visitors recommended it as a possible location for Professor Dunglison to have a dispensary for half an hour three days a week, “for the purpose of dispensing medical advice, vaccination, and aid in Surgical cases of ordinary occurrence.” [23] Finances of the patients would determine whether they were treated for free or had to pay half a dollar though all would be encouraged to receive the smallpox vaccine free of charge. Students were permitted to attend with the professor and to help prepare medicines. [24]

An Unusual Proposal for the Theatre

Previous: The Need for an Anatomical Theatre
Next: “Subjects” for Anatomy Class